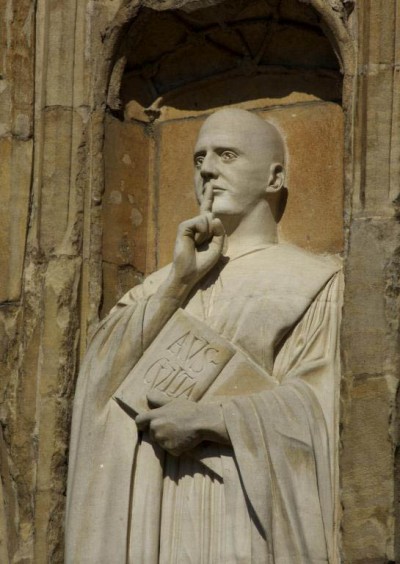 Saint Benedict enjoins the practice of silence because he knows that in much speaking there will inevitably occur sins against charity, justice, purity, truth, and a many other virtues.

Silence begin within oneself. There are men who keep up a ceaseless conversation with themselves. Their souls are polluted by the noise of their own vain chatter. Outwardly these men may appear to be quiet but, inwardly, they never stop talking. Their secret conversations are made up of criticisms, complaints, and comparisons. They indulge in detailed judgments of their brethren and in reveries of self–pity. When they go to prayer they cannot pray because their interior noise keeps them from adoring in the silence of a listening heart.

There are also men who cannot let go of the past. They keep an interior archive of old recordings: negative and hurtful things said by parents, or siblings, or teachers, or employers, or colleagues. At the slightest provocation they replay old recordings and respond to them inwardly with fear, resentment, anger, sadness, and discouragement. One who is resolved to practice a true Benedictine silence must have the courage to get rid of his interior archive of old recordings. Such voices from the past impinge on the present and pollute the heart with a toxic noise.

Benedictine silence, ultimately, is way of listening to God. It is a way of responding to the silence of the Host with the silence of adoration. Tacere et adorare: Be still and adore. Our Constitutions are particularly compelling on the practice of a eucharistic silence:

58. Saint James tells us that if any man offend not in word, the same is a perfect man.  In this chapter, our blessed father confirms the truth of this. And the prophet Isaias, treating of quietness, tells us that it eminently contains all justice and holiness.  One cannot express its excellence more worthily.  If proof you would have, seek no further than the silence practiced by the Incarnate Word on earth for thirty years, and even in the hour of His Passion, choosing rather that He should be attached to the Cross than break His mysterious silence.  He could have, with a single word, confounded his enemies, just as He could today confound the wicked, who outrage Him daily in the divine Sacrament of the Altar, profaning His tabernacles, and bearing away the sacred ciboria in sacrilegious hands, but in this mystery, as in His Passion, Jesus autem tacebat.  This is the lesson that He would teach the monks made over to Him by sacrifice.  They will endeavour to observe silence so exactly that in imitation of Him, they should rather suffer unjust accusation than prove their innocence by long discourses, mindful that sacred silence befits sons of the Most Holy Sacrament.

59. The silence of the Sacred Host must reign, then, not only over the hearts, minds, and lips of the monks, but over the entire monastery and its land, so as to foster an atmosphere of order and of peace conducive to the prayer of the heart in a spirit of ceaseless adoration.

60.  By practicing silence at all times, the monks will avoid innumerable sins of the tongue, and foster, both within themselves and within the monastery, an atmosphere that offers optimal resonance to the Word of God.

61.  By assiduous contemplation and adoration of the Sacred Host, the monks will come to love the observance of silence by which it is given them to imitate the sacramental state of the Incarnate Word, who, now in the Most Holy Sacrament of the Altar, as once in His hidden life and bitter Passion, remains silent and still.