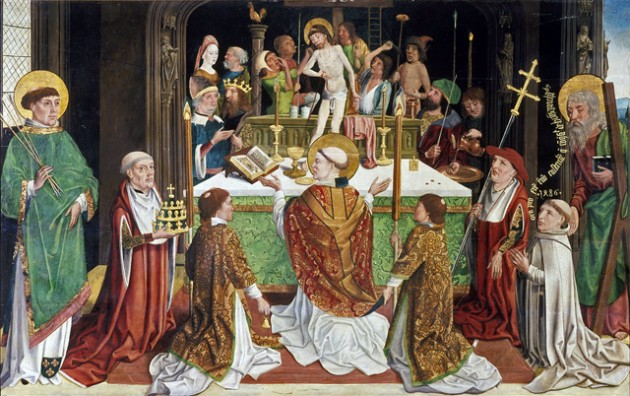 On Wednesday, May 28, 2008 Pope Benedict XVI dedicated his weekly audience to Pope Saint Gregory the Great. In honour of the saint’s feast, here is a portion of the Holy Father’s discourse:

Perhaps the most organic text of Gregory the Great is the Pastoral Rule, written in the first years of his pontificate. In it Gregory intends to delineate the figure of the ideal bishop, teacher and guide of his flock. To this end he illustrates the gravity of the office of pastor of the Church and the duties it entails: Therefore, those who are called to such a task were not called and did not search for it superficially, those instead who assume it without due reflection feel arising in their spirit an onerous trepidation.

Taking up again a favorite topic, he affirms that the bishop is above all the “preacher” par excellence. As such, he must be above all an example to others, so that his behavior can be a reference point for all. Effective pastoral action requires therefore that he know the recipients and adapt his addresses to each one’s situation. Gregory pauses to illustrate the different categories of faithful with acute and precise annotations, which can justify the appraisal of those who have seen in this work a treatise of psychology. From here one understands that he really knew his flock and spoke about everything with the people of his time and of his city.

And What I Have Failed to Do

The great Pontiff, moreover, stresses the daily duty that a pastor has to acknowledge his own misery, so that pride will not render vain — before the eyes of the supreme Judge — the good he accomplished. Therefore, the last chapter of the rule is dedicated to humility. “When one is pleased about having attained many virtues it is good to reflect on one’s own insufficiencies and humble oneself. Instead of considering the good accomplished, it is necessary to consider what one has failed to accomplish.”

All these precious indications demonstrate the very lofty concept St. Gregory had of the care of souls, defined by him as “ars artium,” the art of arts. The rule had great success to the point that, something rather rare, it was soon translated into Greek and Anglo-Saxon.
Significant also is the other work, the Dialogues, in which to his friend and deacon Peter, convinced that the customs were now so corrupt so as not to allow for the emergence of saints as in past times, Gregory demonstrates the contrary: Holiness is always possible, even in difficult times.

He proves it by recounting the life of contemporary and recently deceased persons, who can well be considered saints, even if not canonized. The account is accompanied by theological and mystical reflections that make the book a singular hagiographic text, able to fascinate whole generations of readers.

The material is drawn from the living traditions of the people and has the objective of edifying and forming, attracting the attention of the reader to a series of questions such as the meaning of miracles, the interpretation of Scripture, the immortality of the soul, the existence of hell, the representation of the above — all topics that were in need of opportune clarification.

The Spiritual Beauty of Saint Benedict

Book II is entirely dedicated to the figure of Benedict of Nursia, and is the only ancient testimony on the life of the holy monk, whose spiritual beauty appears in the text in full evidence.

Salvation Through the Dark Meanderings of Time

In the theological design that Gregory develops through his works, the past, present and future are relativized. What counts most of all for him is the entire span of salvific history, which continues to unravel through the dark meanderings of time. In this perspective, it is significant that he inserts the announcement of the conversion of the Anglos right in the middle of the Moral Commentary on Job. To his eyes the event constituted an advancement of the Kingdom of God which Scripture addresses. With good reason, therefore, it is to be mentioned in the commentary on a sacred book.

According to him, the leaders of the Christian community must be committed to reread events in the light of the word of God. In this respect, the great Pontiff felt the need to guide pastors and faithful in the spiritual itinerary of an illumined and concrete “lectio divina,” placed in the context of their lives.

The Humility of Hierarchs

Before concluding, it is only right to say a word on the relationship that Pope Gregory cultivated with the patriarchs of Antioch, Alexandria and Constantinople. He was always concerned with acknowledging and respecting their rights, allowing himself no interference that would limit their legitimate authority.

If, however, in the context of his historical situation, St. Gregory was opposed to the title “ecumenical” on the part of the patriarch of Constantinople, he did not do so to limit or deny this legitimate authority, but because he was concerned about the fraternal unity of the universal Church. He did so above all by his profound conviction that humility should be the fundamental virtue of every bishop, even more so of a patriarch.

Gregory remained a simple monk in his heart and that explains why he was decidedly opposed to great titles. He wished to be — this is his expression — “servus servorum Dei.” This word, coined by him, was not a pious formula in his mouth, but the true manifestation of his way of living and acting. He was profoundly impressed by the humility of God, who in Christ made himself our slave; he washed and washes our dirty feet.

Imitator of the Humility of God