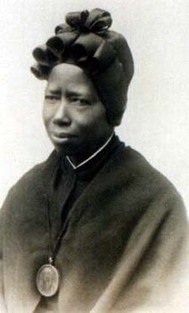 I originally posted this homily eight years ago. The message of Saint Josephine Bakhita is so compelling that I decided to post it again this year for the 65th anniversary of her death.

Yesterday, 8 February, was the feast of Saint Josephine Bakhita as well as the sixty-fifth anniversary of her death. Born in Sudan, Africa in 1869, Madre Josephine died in Italy in 1947, and was canonized by Pope John Paul II on October 1, 2000. Her memorial, endowed with a magnificent new Collect, was inserted into the Third Typical Edition of the Roman Missal published in 2002.

The Holy Ghost Interceding for Us in the Liturgy
I have had occasion to say this many times before, but it bears repetition: the Collect prescribed by the liturgy on any given day is a pure distillation of the Church’s prayer. The Collect of the day is nothing less than the Holy Ghost “helping us in our weakness; for we do not know how to pray as we ought” (Rom 8:26). The Collect of the day is the Church articulating for us those “sighs too deep for words” (Rom 8:26) by which the Holy Ghost himself intercedes for us, filling us with the prayer of Christ.

Every line of the Collect for Saint Bakhita merits attention; every phrase needs to be repeated in meditation.

O God, who led Saint Josephine Bakhita
from abject slavery
to the dignity of being your daughter and the bride of Christ,
give us, we beseech you, by her example,
to follow after Jesus the Crucified Lord with unremitting love
and, in charity, to persevere in a ready mercy.

Called by a New Name
As a result of the trauma she endured when she was kidnapped and sold into slavery as a little girl, Saint Josephine Bakhita could not remember the name her parents had given her. Her captors called her Bakhita, meaning “fortunate” or “lucky.” “thou shalt be called by a new name, which the mouth of the Lord shall name. And thou shalt be a crown of glory in the hand of the Lord, and a royal diadem in the hand of thy God” (Is 62:2-3). Years later, at her baptism, Bakhita received the name Giuseppina or Josephine. 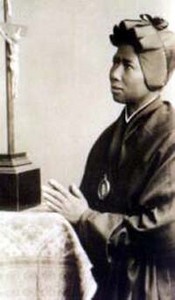 A Saint Sold and Resold
Bakhita’s life was marked by indescribable emotional, moral, and physical suffering. After her kidnapping, she was sold and resold in the slave markets of El Obeidh and Khartoum. In the capital of Sudan, Bakhita was bought — yes, bought — by the Italian Consul, one Callisto Legnani. Bakhita was surprised that her new owner didn’t use the lash on her when giving orders; he treated her with kindness and affection. When the political situation obliged him to return to Italy, he took Bakhita with him. There Bakhita entered the service of another family. These good people, in turn, entrusted Bakhita to the Canossian Daughters of Charity in Venice.

Daughter of God
Bakhita became a catechumen and was baptized on January 9th, 1890. From then on, she would kiss the baptismal font, saying, “Here I became a daughter of God.” The Collect echoes this: O God, who led Saint Josephine Bakhita from abject slavery to the dignity of being your daughter. . . .

Christ, the Gentle Master
Protected by Italian law, Bakhita chose to remain among the Canossians. The psalmist expresses her choice: “Better is one day in thy courts above thousands. I have chosen to be an abject in the house of my God, rather than to dwell in the tabernacles of sinners” (Ps 83:10). She who had been bought and sold by a series of human masters discovered the tender love of Christ, the gentle Master. Sweet paradox. Bakhita called God, “Master.”

La Madre Moretta
On December 8th, 1896, Bakhita was consecrated forever to God as a Canossian Daughter of Charity, becoming Mother Josephine. The local people and school children called her affectionately la Madre Moretta, “the little Black Mother.” Daughter of God, Bride of Christ, Mother of the little and the poor, Bakhita became the complete consecrated woman: free, loved, fruitful, fully realized. “Thou shalt no more be called Forsaken: and thy land shall no more be called Desolate: but thou shalt be called My pleasure in her, and thy land inhabited. Because the Lord hath been well pleased with thee: and thy land shall be inhabited” (Is 62:4).

No Trace of Bitterness
Mother Josephine Bakhita served her Master for almost fifty years. The Collect speaks of her following Jesus the Crucified Lord with unremitting love. In charity, it says, she persevered in a ready mercy. This is the miracle of Saint Bakhita. There was no trace of bitterness in her. The cruel degradations and unspeakable moral outrages suffered as a slave, though never forgotten, had no hold on her. She to whom men had refused mercy persevered to the end in a ready mercy for others. She was not a prisoner of her past. We who are so often prisoners of the past, unable to let go, unable to forgive, unable to move beyond old hurts, do well today to seek her intercession.

Set Free by Love
Looking to the future does not mean forgetting the past; it means transfiguring it. It means re-reading it with eyes of mercy in the light of faith. We need not remain slaves of our own histories, chained to the evil things, the hurtful things, the unjust things that happened ten, twenty, thirty, forty, fifty, or seventy-five years ago. There is another way: the way of those set free by love.

Two Suitcases
Toward the end of her life, Mother Bakhita used to smile and say: “I travel slowly, one step at a time, because I am carrying two big suitcases. One of them contains my sins, and in the other, which is much heavier, are the infinite merits of Jesus. When I reach heaven I will open the suitcases and say to God: ‘Eternal Father, now you can judge.’ And to St. Peter: ‘Close the door, because I’m staying.'”

La Madonna
In her final agony Bakhita relived the horrors of her enslavement. “Loosen the chains,” she said to her nurse, “they are so heavy.” The Mother of God herself came to loosen the chains. Bakhita died smiling, saying, la Madonna, la Madonna. It was February 8th, 1947. 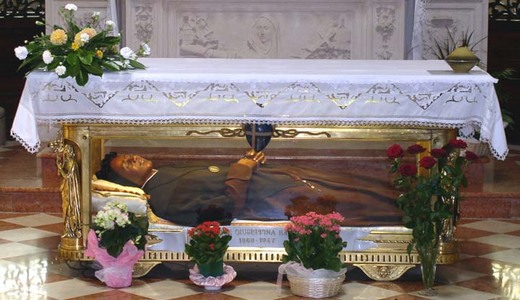 The Holy Sacrifice of the Mass, Mystery of Liberation
Saint Josephine Bakhita, intercede for us that, freed from the chains that bind us to the past, we may go forward into freedom. For each of us the path forward is the Communion procession to the altar. The Holy Sacrifice of the Mass is the mystery of our liberation, the healing of memories, the Bread to children given, the Chalice of undying love lifted daily to the lips of the Bride.