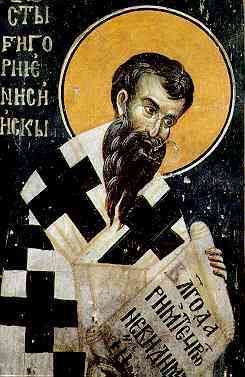 A Saint With Holy Siblings
Saint Gregory of Nyssa is often overshadowed by his illustrious brother Saint Basil the Great and his remarkable sister Saint Macrina. Happily, our Benedictine calendar brings him into the light by celebrating his feast during the Octave of the Epiphany on January 10th in communion with the Eastern Orthodox and Catholic Churches. Saint Gregory is best known for his Life of Moses, especially in monasteries where it is often given as a Lenten book.
The Holy Father’s Presentation of Saint Gregory
Pope Benedict XVI gave a splendid introduction to the life and teaching of Saint Gregory of Nyssa on August 29th and September 5th, 2007. He quoted Saint Gregory’s teaching on prayer:
“Through prayer we succeed in being with God. But anyone who is with God is far from the enemy. Prayer is a support and protection of charity, a brake on anger, an appeasement and the control of pride. Prayer is the custody of virginity, the protection of fidelity in marriage, the hope for those who are watching, an abundant harvest for farmers, certainty for sailors” (De Oratione Dominica 1: PG 44, 1124ab).
Becoming God’s Friend
Who is Gregory of Nyssa? A contemporary author has this to say about him: “Athanasius was the hammer, Basil, the stern commander, Gregory of Nazianzus the tormented singer, and it was left to Gregory of Nyssa to be the man enchanted with Christ” (Robert Payne, The Holy Fire, p. 168). The man enchanted with Christ. I love that. Saint Gregory wrote that, “the one thing truly worthwhile is becoming God’s friend.”
Never Cease to Desire God
Gregory’s elder sister Macrina introduced him to the spiritual life and remained his counselor and inspiration until her death. Gregory and Macrina were more than brother and sister; they were friends in the Holy Spirit. Macrina’s death plunged him into grief. Out of the darkness of that crisis Gregory emerged shining with the light reflected from Christ, the Human Face of God. “This is the true vision of God,” he says: “that those who lift their eyes toward Him never cease to desire Him.”
Advancing While Motionless
The spirituality of Gregory of Nyssa is one of desire. The journey toward God goes from desire to desire. In his Life of Moses, Gregory has God say, “O Moses, you are straining with so great a desire for that which is before you and there is no weariness in your progress. Know that the spaces around you are so vast you will never reach the end of your journey. Here there is only motionlessness. I set you on the Rock; and now there occurs the most astonishing thing of all: for here to be in motion, and to be unmoving, are the same thing. Here he who advances stops, and he who stops advances, and he advances by the very fact that he is motionless.” The next time you feel that in your silent prayer nothing is happening and that you are getting nowhere, remember that. You advance by the very fact that you are motionless.
And His Wife Theosebia
Gregory was a married man. His wife Theosebia was his companion on the Godward journey. Notwithstanding his marriage, Gregory was chosen to be bishop of Nyssa or, more exactly, was pressured into it by his holy but somewhat overbearing brother Basil. Gregory described his ordination as the most miserable day of his life. To brilliant ecclesiastical careers and churchy business he preferred a contemplative solitude shared with his wife.
Falsely Accused and Vindicated
Gregory had no talent for administration. He was lacking in diplomacy and tact. He got himself into a terrible mess over the handling of Church funds, was falsely accused of embezzling Church money, arrested, and thrown in jail. Then he escaped and went into hiding while a synod made up of Arian bishops and officials of the court set about deposing him. He wrote that, during this time, he had more happiness as a fugitive than when wearing his magnificent episcopal robes as bishop of Nyssa. After the storm blew over, Gregory returned to his flock at Nyssa. He attended the Second Council of Constantinople in 381 where he was acclaimed as a pillar of the Church.