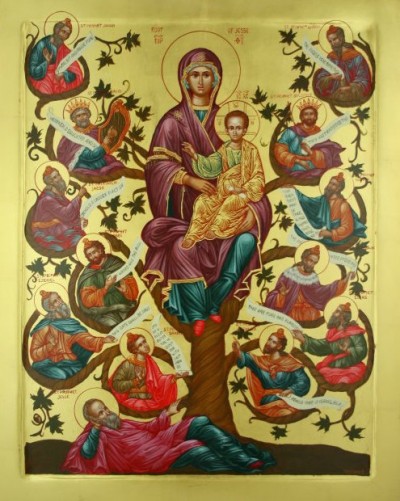 This morning at Matins:

From a Homily by St Ephrem, Deacon and Doctor

Keep ever in thy mind the fear of the Lord, being mindful at all times of that last and dreadful day, when the heavens shall be consumed by the heat of fire, and the earth and all that is upon it shall perish.  When the stars shall fall like leaves, the sun and the moon shall be darkened, nor shall they give forth light.  When the Son of man shall appear, and shall descend from heaven upon the earth, the Powers of heaven shall be troubled.  When the appearance of the Angels, and the sound of their trumpets, shall prevail, then fire shall burn before him, and hastening on, it will consume the earth.  Mighty tempests will rise about him, and dreadful earthquakes and lightnings such as have never before been seen, nor will be, until that day; so that the very powers of heaven will be seized with a great trembling.

We, too, my brothers, in what state shall we be then?  What fear and dread shall fall upon us?  Recall to mind, brother, the Israelites in the desert, and how they were unable to endure the dark and obscurity, the sound of trumpets, and the voice of the Lord speaking from the midst of the flames.  And they pleaded that the Voice of the Lord should not come nigh to them.  For they were unable to endure it, and what was being done there, though he had not descended in wrath, neither had he spoken directly to them, but rather as though comforting them, he had let them know that God was with them.  What then, dearest brethren, if they could not even with this alleviation endure his descent amongst them, when the heavens were not consumed by fire, nor the earth, and all things upon the face of it?  And there was no sound of trumpet, such as that future trumpet will make, to awaken all who from the beginning have slept.  Nor had there then taken place any of these dreadful future events, and yet they could not endure it.

But with what joy shall we be filled, if we are directed to the right hand of the King?  What must we be like when the Just embrace us there?  When, I repeat, they shall embrace thee there, Abraham, Isaac, Jacob, Moses, Noah, Job, Daniel, the Holy Prophets, the Apostles, the Martyrs, who all were pleasing to God in the days of the flesh?  And whomsoever you have heard of, and whose life you have admired, and whom you now wish to look upon, they will come to thee, and embrace thee, rejoicing in thy salvation.  What manner of men must we then be?  Of what kind shall be that unspeakable delight which we are to receive, when the King shall with joyfulness say to those who will be on His right hand: “Come ye blessed of my father, possess the kingdom prepared for you from the foundation of the world”.