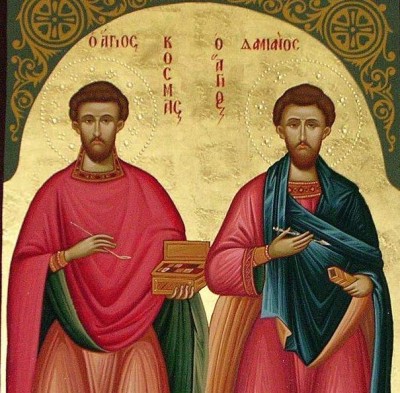 Saints of the Roman Canon

Loved in the East

Looking Eastward, we see a similar attachment to Saints Cosmas and Damian. They are named explicitly at every Divine Liturgy at the moment of the preparation of the bread and wine. Placing a piece of bread on the holy diskos, the priest says, “In honour and memory of the holy, wonderworking, and Moneyless Ones . . . and all the holy physicians labouring without pay.” Moneyless physicians labouring without pay! What a marvelous notion! One begins to understand why Saints Cosmas and Damian came to occupy a place of choice in the affection of the Christian people.

Healing by the Power of Christ

Who were Cosmas and Damian? Tradition has it that they were twin brothers, Arabs by race, and physicians, practicing their profession without claiming payment from their patients. Hence they were known as the “moneyless” or “unmercenary” physicians. The lesson at Matins has this lovely line: “Not more by their knowledge of medicine than by the power of Christ they healed diseases which had been hopeless for others.” Ultimately, Cosmas and Damian gave their lives in witness to the Divine Physician Christ. They were honoured first in the East, and by the sixth century they had their own basilica in Rome where they were depicted in mosaics which can still be seen today.

Intercession for Physicians and Nurses

It is no surprise that Cosmas and Damian came to be invoked as the patron saints of physicians, surgeons, and other health care givers. For this reason, we remember today all the unmercenary physicians and nurses who have cared for us in the past, and who care for us now. Some of them may be reading this post. We shall be praying for you today, dear Fran, Lisa, Raphael, Tracy, and Brother Luke.

The Word That Heals

In some way we are, all of us, moneyless health care givers. There is a long tradition of this — an apostolic one, in fact. Remember Saint Peter saying at the “gate which is called Beautiful” (Ac 3:2) “I have no silver or gold, but I give you what I have” (Ac 3:6). Saint Peter then offered healing in the name of Jesus Christ of Nazareth. The charism of healing may not given to all, but the word of comfort, the word of the Lord that dispels fear and brings assurance, is something that each of us can offer. Holy Father Benedict, speaking of the cellarer of the monastery, says that, “a good word is above the highest gift” (RB 31:14). If words can wound, bringing suffering, they can also heal, bringing light and peace.

Healing in the Sacred Body and Precious Blood of Christ

Ultimately, the words that bring us together for the Holy Sacrifice of the Mass on this feast of Saints Cosmas and Damian and on every other day — “This is my Body which will be given up for you,” and “This is the cup of my Blood” — are words of healing. They come forth from the mouth of the Divine Physician, moneyless and unmercenary who, “though he was rich, yet for your sake became poor, so that by his poverty you might become rich” (2 Cor 8:9).