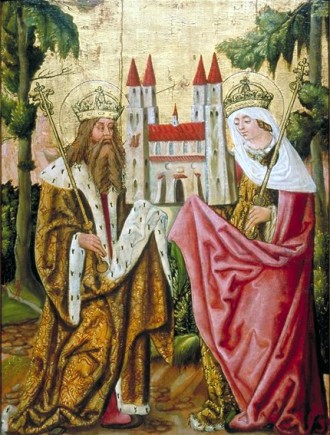 Benedictine Oblates living and working in the world have two holy patrons: Saint Francesca of Rome whom we celebrated in March, and today’s Saint Henry. One of the things related about Saint Henry is that, on arriving in any town, he would spend his entire first night there in a vigil of prayer in a church dedicated to the Holy Mother of God. When he arrived in Rome in 1014, he spent the night in the Basilica of Saint Mary Major, Rome’s Bethlehem. While keeping vigil, he saw the “Sovereign and Eternal Priest-Child Jesus” enter to celebrate the Holy Mysteries. Saints Lawrence and Vincent assisted Our Lord as deacons. A throng of saints filled the basilica; Angels chanted in choir. It is noteworthy that in Henry’s vision Christ the Priest is a Child. One wonders if he was not keeping vigil before the altar of the Crib of the Infant Jesus in Saint Mary Major, a place of grace for countess souls through the ages.

Touched by the Book of the Gospels

Henry’s vision is very much like those of Saint Gertrude the Great: a pulling back of the veil, a glimpse of “what no eye has seen, nor ear heard, nor the heart of man conceived” (1 Cor 2:9). After the Gospel, an Angel bearing the book of the Gospels was sent to Henry by the Mother of God. Normally, one kisses the book of the Gospels. Instead the Angel touched Saint Henry’s thigh with it, saying, “Accept this sign of God’s love for your chastity and justice.” From that moment on, Henry limped like Jacob after his night vigil spent wrestling with the angel (cf. Gn 32:24-25). How fascinating — and how consistent with God’s dealings with men — that a mark of weakness should be the sign of a special grace!

Henry was crowned Emperor in Saint Peter’s Basilica by Pope Benedict VIII in 1014. Henry cherished Benedictine life, spending time in monasteries whenever he could. His greatest joy was to occupy a stall in choir and join the monks in singing the Divine Office. Henry founded monasteries throughout the Empire and endowed them liberally. He became an oblate of the Abbey of Cluny and then asked to make profession as monk at the Abbey of Saint-Vanne. The abbot received him as a monk, and then ordered him, in the name of obedience, to take his place again on the imperial throne.

Set Your Mind on Things That Are Above

Living in virginity with his wife Saint Cunegonda, Saint Henry preserved the heart of a monk. Limping through life, because of his thigh touched by the Angel bearing the Book of the Gospels, Saint Henry represents every man who, while living in the world, is not entirely at home in it. “Set your minds on things that are above,” says the Apostle, “not on things that are on earth” (Col 3:3).

In what way was Saint Henry a monk in the midst of the world? He understood that his basic task as a Christian was to contemplate the Face of Christ. The Face of the Child Christ was shown him in that mysterious dream by night in Saint Mary Major. The Child Christ he saw was also the High Priest ascending the altar for the Holy Sacrifice. As an Oblate, Saint Henry surely knew that, in every Mass, his place was on the corporal, close by the bread and the chalice. The Child-Priest, in raising the paten and the chalice heavenward was lifting up Henry’s life, making it an oblation to the Father. He will do the same for us today. We have only to seek His Face and abandon ourselves into His hands.