The icon of Saint Thomas More is by the graced hand of Brother Claude Lane, O.S.B., monk of Mount Angel Abbey. 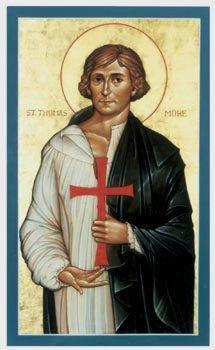 O God, who didst fill Thy blessed bishop John
with such great courage
that he cast away his life in the cause of truth and justice,
enable us through his intercession and example
to give up our life in this world for the sake of Christ,
so that we may find it again in heaven.

O God, who, when the blessed martyr Thomas
had to choose between the allurements of the world
and the pains of imprisonment and death,
didst give him strength to embrace Thy cross
with a cheerful and resolute spirit,
we pray Thee grant that we too,
thanks to his intercession and example,
may fight manfully for faith and right,
and be found worthy to make a joyful entrance
into everlasting bliss.

Men of Fire and of Light
Today is the feast of two martyrs, one a bishop and the other a husband, father, lawyer, statesman, and philosopher: Saints John Fisher and Thomas More. Both were men of fire and of light. Both fought manfully and suffered the martyrdom of John the Baptist, the Friend of the Bridegroom of whom Our Lord said, “He was a burning and shining lamp, and you were willing to rejoice for a while in his light” (Jn 5:35).

The Sun Snatched from the Universe
Saint John Fisher was alone among all the bishops of the realm to stand against Henry VIII in the “great affair” of his divorce and against the Act of Supremacy by which the King repudiated the jurisdiction of the Pope over the Church in England. The Church in England was to become the Church of England. Protestantization would follow and, above all, the suppression of the Holy Sacrifice of the Mass offered according to the rite of the Church of Rome. Concerning Holy Mass, Bishop John Fisher had written: “He who goes about to take the Holy Sacrifice of the Mass from the Church, plots no less a calamity than if he tried to snatch the sun from the universe.”

Opinions and Options
An entire national body of bishops save one broke the bond of their communion with Peter and fell into schism and heresy. A sobering lesson! There is no security in the Catholic faith apart from a loyal attachment to the See of Peter expressed in a joyful communion of mind and heart, and in an effective obedience. Today, the Anglican Communion worldwide is torn and broken apart into factions, and factions of factions. In the absence of a supreme magisterium nothing remains but opinions and options.

The Way
Imitating Saints John Fisher and Thomas More, may we spurn the temptation to prefer “our way” to The Way and also, like them, cheerfully and resolutely put nothing before the love of Christ who says: “I came to cast fire upon the earth; and would that it were already kindled” (Lk 12:49, Magnificat Antiphon at First Vespers of the Sacred Heart).