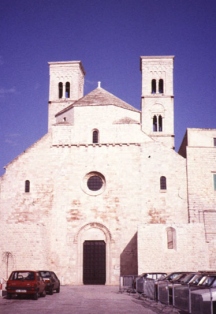 Cistercians celebrated today the memorial of Blessed Corrado (Conrad) of Bavaria. Born in 1105, Conrad was the son of Henry the Black, Duke of Bavaria. The young Conrad was sent to study under the doct canons of Cologne. Drawn to Saint Bernard by the latter’s magnetic holiness and personal charm, Conrad entered the abbey of Clairvaux.
Shortly thereafter he received Saint Bernard’s permission to go as a pilgrim to the Holy Land and to live there as a hermit. He remained in Palestine for several years in the service of an elder. Threatened by the incursions of Islamic forces and having learned of Saint Bernard’s declining health, Conrad decided to return to Clairvaux.
When he arrived in Bari, he learned that Bernard was already dead. Rather than return to Clairvaux, he venerated the relics of Saint Nicholas in Bari and then withdrew to Modugno where he set himself up as a hermit in a grotto dedicated to the Blessed Virgin. He reposed in 1154 or 1155 with a reputation for holiness and miracles. His body was transferred to Molfetta, becoming its principal patron saint. On certain feastdays, his head, preserved in a reliquary, is carried in procession. Gregory VI confirmed his cultus on 6 April 1832. The photo shows the cathedral of Molfetta where Saint Corrado’s body rests.