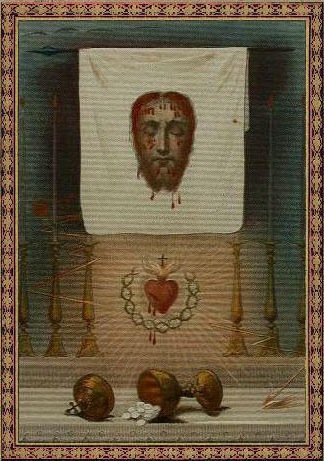 Someone informed me, yesterday, of an auction being held this weekend at a farm not far from the priory. Among the old furniture and various objects being put up for sale, there were, I was told, a monstrance, a chalice, a ciborium, a tabernacle, and other ecclesiastical appointments. I thought it worth my while to investigate the situation more closely.

Entering the farm, I found myself in a kind of central yard surrounded by outbuildings or sheds filled with furniture and bric–a–brac. The public auction is scheduled to begin tomorrow. Entering a shed, I saw an array of statues of Our Lord, Our Lady, and the saints. One of them, a carved statue of Our Lady, was especially beautiful. Next to it I saw a monstrance (complete with the lunula), a ciborium, a couple of communion patens, and a tabernacle that looked as if it had been wrenched out of a stone altarpiece or wall. The key was in the tabernacle door.

Something moved me to open the tabernacle door. I was not prepared for what I saw. There, lying on the stained and mouldy floor of the tabernacle — once lined with immaculate white silk — were a dirty corporal and two Hosts. My sense was that these were consecrated Hosts: the adorable Body of Jesus Christ. Unconsecrated hosts would not have been left lying in a locked tabernacle.

I attempted to explain to the young attendant what I had just discovered in the tabernacle. He was unable to grasp what I was saying and seemed never to have heard the word “host” before. Moments later the gentleman conducting the auction arrived. I told him that among his wares were things belonging to God, sacred things, and that I wanted to rescue them so as to restore them to God’s house. Looking at the monstrance, the ciborium, and the tabernacle containing its priceless Treasure, I offered him a price for the lot of things. He accepted my offer, and allowed me to make my purchase in advance of the public auction. . The transaction completed, I returned to the priory with my acquisitions; I was sorrowful but grateful.

At the priory, I called the brethren together. We carried the tabernacle to the sacristy, where I opened it and transferred the Sacred Hosts to a pyx. Accompanied by a brother bearing a lighted candle and by the rest of the community, I went to the Oratory and placed the pyx in the tabernacle. Kneeling, we prayed the Collect of the Most Blessed Sacrament, and made an act of reparation. And then I wept. Would that I could, in some way, make reparation for the irreverence, coldness, and ignorance that surround Our Lord in the Sacrament of His Love! Would that I could preach the surpassing wonder of His Real Presence over the entire length and breadth of this island!

Not only is Our Lord hidden — Vere tu es Deus absconditus — He is also unknown. Even among those who frequent their churches Sunday after Sunday, there are souls in darkness concerning the mystery of the Real Presence of Our Lord Jesus Christ in the Most Holy Sacrament of the Altar. Two or three generations have come to understand the Blessed Sacrament as mere holy bread. Jesus the Host —meaning the Victim, the Lamb of Sacrifice — is forgotten. His adorable Body is treated as a thing, as an object of little worth apart from the subjective sentiments one chooses to attach to it. Once, in this very island, men shed their blood for the Host. Once, in this very island, men deemed Him their all, wanting nothing on earth apart from Him.

The Green Wood and the Dry

What can I pray? I ask Our Lord to reveal Himself. I ask Him to give words to His priests that they might proclaim the adorable Sacrament of the Altar and make known Its wonders at every opportunity. I ask Our Lord to inspire His priests to speak of Him and, even more, to give a worthy example of faith, of adoration, of reverence, and of burning love. “For if in the green wood they do these things, what shall be done in the dry?” (Luke 23:31)

Who are the guardians of the Real Presence of Jesus Christ if not His priests? Who are the sentinels charged with keeping watch before Him? Who are His chosen friends, called to tarry in His presence and to prefer His company to all else? Who are the men set aside to handle His most pure Body and to touch the chalice of His Precious Blood? These are His priests, my own brothers.

Prayer for Eucharistic Light and Fire

Send, O Jesus, a penetrating light upon thy priests. Enkindle a fire of love in their hearts. Increase their faith and grace them with an angelic reverence in Thy presence, lest by treating Thee carelessly, or with indifference, they scandalize the little ones who look to them for an example of living faith and of humble adoration.

The light of the true faith that once illumined Ireland has grown dim; the hearts of the multitude have grown cold. Reveal, O Jesus, Thy Eucharistic Face! Let the flames that escape from Thy Eucharistic Heart enkindle a great body of adorers, especially among Thine own priests, lest Thy Church suffer too great a darkness, too piercing a cold. Amen.