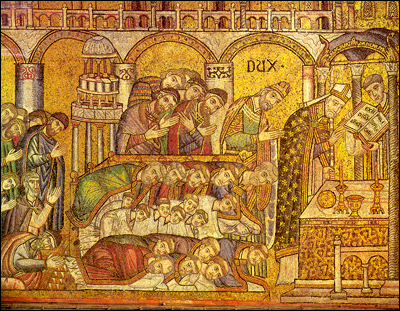 The 16th Sunday After Pentecost
The Most Holy Eucharist is the Sacrament of the Divine Humility.
Those who partake of It worthily
enter into the humility of God,
for one cannot eat the Bread of the Humble
and remain proud.
Those who adore this Sacrament of the Divine Humility
are drawn into the obedience of God,
who, at the word of a man,
of a priest speaking and acting in the Name of Christ,
annihilates the substance of a little bread
to replace it entirely
with His Divinity united to the Sacred Humanity.
Who can describe the Eucharistic Humility of God?
Here the Word made flesh,
born of the Virgin Mary, and crucified,
He whose side was opened by the soldier’s lance,
He who rested in the darkness of the tomb,
He who rose from the dead
and is seated in glory at the right hand of the Father,
here, He is really present:
silent in the fragility of the sacred species,
and hidden from view not only by the sacramental veil
–the appearance of bread–
but, more often than not, by the tabernacle as well.
This is the Humility of God,
hidden from the eyes of the learned and the clever,
but revealed to little children.
I think of Blessed Francisco Marto of Fatima,
who, at nine years of age,
understood the mystery of the Hidden Jesus
and wanted nothing more than to console Him
by hiding himself close to the tabernacle.
Worldly arrogance scoffs at the folly of a God
hidden under the appearance of a little bread
and put away in a box;
but this Mystery follows and completes
the disconcerting logic of God who hides Himself
in a Virgin’s womb,
becoming a man like unto other men
in all things, save sin.
The Eucharistic Humility of God
is inseparable from His Eucharistic Silence.
This Saint Benedict understood,
for in his Rule, the silent are humble,
and the humble silent.
This our Mother Mectilde understood
for she wanted her Benedictine adorers to bury themselves
in the silence of the hidden God,
the ineffably humble God
in the Most Holy Sacrament of the Altar.
This the little Thérèse understood
for she knew that one who would find the Hidden Face of Jesus,
must first hide himself.
The Eucharistic Face of Jesus, His Hidden Face,
is revealed only to those who themselves risk being hidden,
as the psalm says:
“Thou shalt hide them in the secret of Thy Face,
from the disturbance of men,
Thou shalt protect them in Thy tabernacle
from the strife of tongues” (Psalm 30:20).
The last place at the banquet is elusive;
he who thinks he has found it
may be surprised to discover
that Another has taken a still lower place before him.
No matter how low we think we have placed ourselves,
no matter how little we think we have made ourselves,
no matter how diligently we think we have sought the last place of all,
no matter how completely we imagine ourselves to be
buried in silence,
there is Another, the Other,
who has forever laid claim to the lowest place,
who, though He be the infinite God,
Creator of all things visible and invisible,
has made Himself littler than a crumb of bread.
Has He not made Himself
the very last thing that remains
when all have left the banquet table:
a fragment of bread to be stored away?
Has He not entered into an inviolable silence
that astonishes even the angelic Choirs
and causes kings to fall silent and adore?
One does not become humble by striving to be so,
for all our striving is infected by an insidious pride.
One does not become humble by striking humble poses,
by affecting a humble speech,
or even by thinking humble thoughts.
And why?
Because humility belongs to God alone
who made it His own in the mystery of the Incarnation,
and who continues to make it His own
so often as the mystic words are uttered by a priest
over a little bread and a little wine mixed with water:
“This is My Body. This is the chalice of My Blood.”
Here is the Mysterium Fidei:
the Eucharistic Humility of God.
Eat the Body of Christ, and digest the Divine Humility.
Drink the Blood of Christ;
it is the elixir of those who would hide themselves with Christ in God.
Since the event of the Incarnation
–the descent of God into the Virgin’s womb,
in view of His descent into death’s dark tomb–
and so often as Holy Mass is celebrated
–the descent of God into the frail appearance of Bread
and into the taste and fragrance and wetness
of a few drops of wine–
humility can be found nowhere else.
The very least and last of the guests
has become The Host,
and The Host
has made Himself the very least and last of the guests.
Tremble, then, to adore Him,
and having adored Him, receive Him,
that your soul may become the throne of the Humble Hidden God,
and His humility your most cherished treasure.
“Learn from Me,” He says,
“for I am meek and humble of heart” (Matthew 11:29),
and again,
“Everyone that exalteth himself shall be humbled,
and he that humbleth himself shall be exalted” (Luke 14:11).
Adoremus in aeternum
sanctissimum et augustissimum Sacramentum.