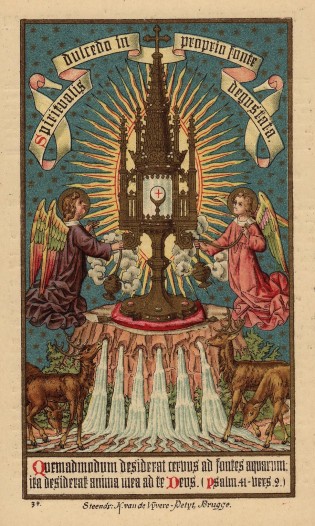 Adoration and Adoration
I should like to respond to a number of queries concerning the practice by which pious individuals gaze at a webcam image of the Sacred Host exposed in a monstrance and, in some way, consider this tantamount to adoration of the Most Blessed Sacrament. This is a practice that needs to be critically evaluated and clarified; it poses a number of theological and pastoral questions.

First of all, let it be said clearly that God is everywhere present and that God can be adored everywhere and at all times. The three Divine Persons indwell the soul of the baptized and a simple act of faith is sufficient to penetrate the inner sanctuary of their presence and to adore them there in spirit and in truth.  This is the teaching of the great Eucharistic mystic, Catherine Mectilde de Bar, as it is the teaching of the Carmelite Blessed Elisabeth of the Trinity. The holy Benedictine says:

“To adore continually it is not necessary to say, “My God, I adore Thee.” It is enough to tend inwardly to God [who is] present, to maintain a profound respect out of reverence for His greatness, believing that He is in us as He truly is. In fact, the Most Holy Trinity dwells in us: the Father acts and operates there with His power, the Son with His wisdom, and the Holy Spirit with His goodness. It is, therefore, in the intimacy of your soul, where the God of majesty abides, that you must adore Him continually.”

Consider also the comforting words of Blessed Elisabeth of the Trinity:

“I think,” she said, “that in Heaven my mission will be to draw souls by helping them go out of themselves to cling to God by a wholly simple and loving movement, and to keep them in this great silence within that will allow God to communicate Himself to them and transform them into Himself.”

The Indwelling Trinity
The affirmations of the mystics are confirmed in the Catechism of the Catholic Church, which, in treating of the indwelling Trinity, refers to the well–known prayer of Blessed Elisabeth.

Even now we are called to be a dwelling for the Most Holy Trinity: “If a man loves me”, says the Lord, “he will keep my word, and my Father will love him, and we will come to him, and make our home with him”:

O my God, Trinity whom I adore, help me forget myself entirely so to establish myself in you, unmovable and peaceful as if my soul were already in eternity. May nothing be able to trouble my peace or make me leave you, O my unchanging God, but may each minute bring me more deeply into your mystery! Grant my soul peace. Make it your heaven, your beloved dwelling and the place of your rest. May I never abandon you there, but may I be there, whole and entire, completely vigilant in my faith, entirely adoring, and wholly given over to your creative action. 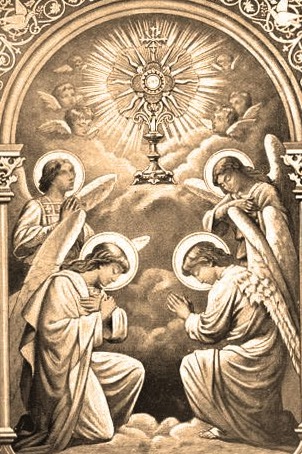 Christ, True God and True Man
In speaking of the Second Person of the Holy Trinity, Our Lord Jesus Christ, we must confess that He is a Divine Person having two natures: a divine nature by reason of His being begotten of the Father from all eternity, and a human nature assumed at the moment of the Incarnation in the virginal womb of His most holy Mother. By His divine nature, Christ Jesus is everywhere present; His sacred humanity, however is really, truly, and substantially present only in the glory of heaven, where He is seated at the right hand of the Father, and in the Most Holy Sacrament of the Altar, be it, for example, after the consecration in the Holy Sacrifice of the Mass, or in the body of the communicant until such time as the sacred species have dissolved, or reserved in the tabernacle, or carried to the sick and dying, or borne in procession, or exposed to the gaze of the faithful in the monstrance.

Power Went Out from Him
The sacred humanity of Our Lord, truly present in the Blessed Sacrament, has all the immediacy of a physical encounter, even if this immediacy is veiled by the sacred species and mediated not by the senses, but by faith alone.  One who approaches the Most Holy Sacrament approaches the sacred humanity of Our Lord just as the apostles and the multitudes approached Him during His life on earth. What Saint Luke says concerning this presence of the sacred humanity of Christ is equally true when this same sacred humanity is veiled by the sacred species: Et omnis turba quærebat eum tangere: quia virtus de illo exibat, et sanabat omnes, “all the multitude was eager to touch him, because power went out from him, and healed them all” (Luke 6:19). Thus do we rightly speak of the radiance of the Eucharistic Face of Christ and of the fire of love that emanates from His Eucharistic Heart.

Reality and Image
When one looks at a webcam image of the Sacred Host exposed in the monstrance, one is not looking at the adorable reality of the Body of Christ, but at an image of that adorable reality. Such an image may move one to devotion, may enkindle in one the desire to adore the Most Holy Sacrament, but it is not Eucharistic adoration as such. One might compare the experience with the emotional effect produced by looking at a loved one in a video or photograph; one is not looking a the reality of that loved one’s face but, rather, at an image of that reality. Seeing the image or photograph of a loved one may spurn one to seek out that loved one’s real presence and company, but cannot be equated with it.

Depictions of the Sacred Host
The iconography of the Most Holy Eucharist in the West is rich, particularly from the Catholic Reformation (beginning with the Council of Trent, 1545–1563) until the 19th century. It was not uncommon to display paintings and sculptures of the Most Holy Sacrament depicted, more often than not, in the monstrance. Such images did not and could not replace the actual seeing of the Sacred Host, but attested to a piety strongly oriented towards Eucharistic adoration, reparation, and contemplation. The same may be said of the webcam images of the Most Holy Sacrament. They are images and, as such, must not be considered as a substitute for or as an alternative to real proximity to the sacred humanity of Our Lord in the Sacrament of His Love. There is today, alas, a certain confusion among pious souls concerning this crucial distinction. The proliferation of televised celebrations of Holy Mass has generated a similar and most unfortunate confusion. There is a real danger in the promotion of so–called “webcam adoration”; it can and does lead to grave theological misapprehensions concerning the mystery of Our Lord’s real presence in the Most Holy Sacrament.

We, Benedictine Monks of Perpetual Adoration, wear beneath the scapular of our monastic habit, a small medallion having the form of a 17th century French monstrance containing the Sacred Host. When I touch this “little monstrance” hidden beneath my scapular, I am reminded of the reality that it signifies and quickened in my resolve to approach Our Lord really present in the Sacrament of His Love. Images hold an important — even indispensable — place in Catholic piety in that they are vivid reminders of the reality they portray and signify.

Praying Before an Image
I am not at all convinced that recourse to “webcam adoration” is a healthy development; it is, rather, fraught with theological and sacramental ambiguities that can easily mislead devout souls. It would be better, when one finds oneself incapacitated, home–bound, or otherwise unable to go physically to the Most Holy Sacrament of the Altar, to make use of a sacred image, a holy icon. This was the wise recommendation of the saintly Father Father Mateo Crawley-Boevey, SS.CC. (1875-1960), the apostle of nocturnal adoration in the home. One who prays before an image of Our Lord — a depiction of His Holy Face or of His Sacred Heart — will be moved to seek out the reality of what the image portrays, either by going to Holy Mass, or by visiting a church where the Most Blessed Sacrament is reserved, or by asking to receive the adorable Body of Christ at home, in hospital, in prison or wherever one may find oneself confined, immobilised, or otherwise incapable of receiving Our Lord sacramentally and of tarrying in His real presence.