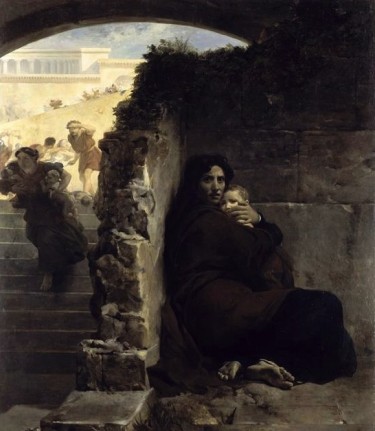 Blessed are they that suffer persecution for justice’ sake, for theirs is the kingdom of heaven (Matthew 5:10).

Christ Jesus is persecuted in the Sacrament of His Love wherein He has made Himself utterly defenseless; wherein He is silent, of fragile appearance, and vulnerable; wherein the glory of His majesty is hid, and even His humanity is veiled.

The Solace of a Companionable Heart

Christ Jesus is scorned, despised, ridiculed, hated, and violated in the very sacrament where He reveals most fully His tender mercy, His loving–kindness for men, His faithful love, and His divine innocence. Even His own forsake Him. In how many tabernacles is He left in a cold solitude with no one to offer Him the solace of a companionable heart?

Immensity of the Divine Mystery

He came offering friendship in the Most Holy Sacrament of the Altar, and what has He received in return? He is treated with irreverence, with carelessness, and with indifference. The mysteries of His Body and Blood have become a matter of routine. Even those who ascend to His altars, there to consecrate bread and wine, making them His Body and Blood, and there to offer Him to the Father, do so with scant attention to the immensity of the divine mystery that unfolds before their eyes, and in their hands, and at their word.

The priests of Christ are at risk because they are the men closest to the perpetual offering of His Body and Blood; this alone makes them the object of Satan’s hatred and the target of his vile persecutions. Our Lord would have us pray for His priests. They are at risk because they are priests, because He chose them from among all other men to stand at His altars and to offer the sacrifice of His Body and Blood. “And the Lord said: Simon, Simon, behold Satan hath desired to have you, that he may sift you as wheat: But I have prayed for thee, that thy faith fail not: and thou, being once converted, confirm thy brethren” (Luke 22:31–33).

Attacks Against the Body of Christ

The persecution of the members of the Mystical Body is directed ultimately against Christ Himself. The most wicked persecutions of His Mystical Body quickly turn to the hatred and persecution of His Eucharistic Body. Again and again, this has been repeated through history, and the present time is no exception to this.

Would that souls could see that Christ in the Sacrament of His Love is as One persecuted for justice’ sake! He is persecuted in the Sacrament of His Love because His holiness is intolerable to the allies of Evil. The Host’s white innocence is a reproach to the impure; the silence of the Host disquiets the philosophers of the present age; the hiddenness of the Host confounds those who would direct the course of history; the humility of the Host disturbs the arrogant and the proud; the vulnerability of the Host disarms those who would seize power and murder the little and the defenseless.

Christ Jesus calls to souls asking them to love Him, and so comfort Him in the persecutions brought against Him in His Mystical Body and in His Sacramental Body.  He asks for souls to love Him in the Sacrament of His Love for them. In the love of little souls — I think here of Blessed Francisco of Fatima — He will find consolation and so triumph over the onslaught of darkness that threatens His Church and that threatens the world.