Skip to content
HomeAdoration of the Most Holy Sacrament of the AltarAve, verum Corpus natum, de Maria Virgine 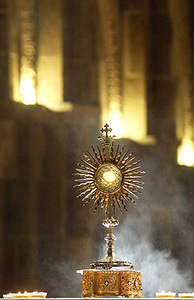 In a certain sense Mary lived her Eucharistic faith even before the institution of the Eucharist, by the very fact that she offered her virginal womb for the Incarnation of God’s Word. The Eucharist, while commemorating the passion and resurrection, is also in continuity with the incarnation. At the Annunciation Mary conceived the Son of God in the physical reality of his body and blood, thus anticipating within herself what to some degree happens sacramentally in every believer who receives, under the signs of bread and wine, the Lord’s body and blood.

As a result, there is a profound analogy between the Fiat which Mary said in reply to the angel, and the Amen which every believer says when receiving the body of the Lord. Mary was asked to believe that the One whom she conceived “through the Holy Spirit” was “the Son of God” ( Lk 1:30-35). In continuity with the Virgin’s faith, in the Eucharistic mystery we are asked to believe that the same Jesus Christ, Son of God and Son of Mary, becomes present in his full humanity and divinity under the signs of bread and wine.

“Blessed is she who believed” ( Lk 1:45). Mary also anticipated, in the mystery of the incarnation, the Church’s Eucharistic faith. When, at the Visitation, she bore in her womb the Word made flesh, she became in some way a “tabernacle” – the first “tabernacle” in history – in which the Son of God, still invisible to our human gaze, allowed himself to be adored by Elizabeth, radiating his light as it were through the eyes and the voice of Mary. And is not the enraptured gaze of Mary as she contemplated the face of the newborn Christ and cradled him in her arms that unparalleled model of love which should inspire us every time we receive Eucharistic communion? (Saint John Paul II, Ecclesia de Eucharistia)