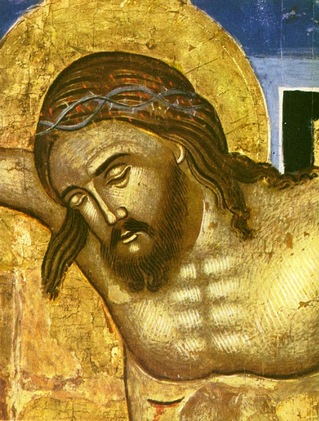 At the core of the Rule of Saint Benedict one finds the open Heart of Jesus Crucified, and His most sweet Face inclined in the “Yes” of His death.

9 Feb. 10 June. 10 Oct.
The twelfth degree of humility is, that the monk, not only in his heart, but also in his very exterior, always shew his humility to all who see him: that is, in the work of God, in the oratory, in the monastery, in the garden, on the road, in the field or wherever he may be, whether sitting, walking or standing, with head always bent down, and eyes fixed on the earth, that he ever think of the guilt of his sins, and imagine himself already present before the terrible judgment-seat of God: always saying in his heart what the publican in the Gospel said with his eyes fixed on the earth: “Lord, I a sinner am not worthy to raise mine eyes to heaven.” And again, with the prophet: “I am bowed down and humbled on every side.”
Having, therefore, ascended all these degrees of humility, the monk will presently arrive at that love of God which, being perfect, casteth out fear: whereby he shall begin to keep, without labour, and as it were naturally and by custom, all those precepts which he had hitherto observed through fear: no longer through dread of hell, but for the love of Christ, and of a good habit and a delight in virtue which God will vouchsafe to manifest by the Holy Spirit in his labourer, now cleansed from vice and sin.

A Via Crucis
We have, at last, come to the twelfth degree of humility. All of Chapter VII is, in effect, a via crucis; the eleven steps are like so many stations in the Passion of Christ continued in the life of the monk. When a monk reaches the twelfth degree, it is to ascend the cross; it is to yield to the embrace of the Crucified; it is press his mouth against Jesus’ sacred side and drink deeply of the wells of salvation. “You shall draw waters with joy out of the Saviour’ s fountains” (Isaias 12:3). At the twelfth degree of humility, the monk, after descending into the valley of his own misery, has come to believe in the loving mercy of the Father, revealed in Love crucified. “And we have known, and have believed the charity, which God hath to us. God is charity: and he that abideth in charity, abideth in God, and God in him” (1 John 4:16).

The Bowed Head
Saint Benedict would have us understand that the monk, having attained the twelfth degree of humility, becomes configured to the crucified Jesus. He becomes a living icon of Christ in the hour of His death. “Jesus therefore, when he had taken the vinegar, said: It is consummated. And bowing his head, he gave up the Spirit” (John 19:30). When Saint Benedict enjoins his monk to go about with bowed head, he is, I think, referring to this very phrase in the Fourth Gospel. The bowed head of the crucified Jesus, and of the monk in whom the Holy Spirit is reproducing His image, signifies a total adhesion to the will of the Father. The humble Benedictine mystic, Mother Mectilde de Bar, understood that the perfection of the monastic life comes ultimately to consist in adoring God and in adhering to His will.

Churches Designed Inclino Capite
The bowed head of Jesus in the very act of passing over to the Father so captured the imagination of certain architects that they designed cruciform churches in which the choir (or sanctuary), instead of being in a straight line with the nave, veers off to the right, in symbolic portrayal of the head of Jesus inclined in death. I saw one such church a few years ago while visiting Viterbo with my friend Maria Carmen. The little 12th century church, dedicated to San Marco, had its altar situated in the “inclined head” of the cruciform plan, to signify the consummation of the Holy Sacrifice of the Cross when Jesus bowed His head in death. This architectural intuition is profoundly Benedictine in inspiration; it symbolizes in stone what Saint Benedict would see expressed in the living stones that are his monks.

Water Into Wine
Having arrived at the mystery of the Cross the monk finds love, love in superabundance, love flowing from the open Heart of Christ. This love makes things formerly found to be arduous — if not impossible — strangely easy and wonderfully possible, even in the face of every dire prediction to the contrary. Salutary prohibitions once observed by constraint, and good things once done out of fear are changed by the Holy Ghost into free expressions of a charity welling up from deep within the soul. Where formerly there was but the chilly water of a strict observance, or the lukewarm water of a not so strict one, there courses a river of new wine. It is the wine of divine love that makes all things sweet, and renders things once purchased dearly, and but fleetingly possessed, gifts freely given, gifts that the opposing forces of men and demons combined cannot take away, for they have been secured by love. “So also you now indeed have sorrow; but I will see you again, and your heart shall rejoice; and your joy no man shall take from you. And in that day you shall not ask me any thing. Amen, amen I say to you: if you ask the Father any thing in my name, he will give it you. Hitherto you have not asked any thing in my name. Ask, and you shall receive; that your joy may be full” (John 16:22-24).