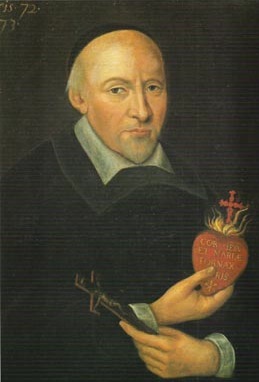 Priestly Union with the Blessed Virgin Mary
Today, 19 August, is the feast of Saint John Eudes, priest and ardent mystic of the Hearts of Jesus and Mary. Saint John Eudes is numbered among the few saints who lived a mystical espousal with the Most Holy Mother of God. Already as a young man, John Eudes placed a wedding band on the finger of a statue of the Blessed Virgin Mary. This was a portent of things to come. As a priest, a reformer of the clergy, and an outstanding preacher, he experienced the fruitfulness that results from what one must dare to call a spousal intimacy with the Mother of God.

The Eternal Father
Consider that priests have a special alliance with the most holy Mother of God. This because, just as the Eternal Father made her participate in His divine paternity, and gave her the power to form in her womb the same Son whom He begets in His bosom, so too does He communicate to priests that same paternity, giving them power to form this same Jesus in the Holy Eucharist and in the hearts of the faithful.

The Holy Ghost
As the Holy Ghost, in an ineffable manner, associated her [the Virgin Mary] with Himself in the most divine of His operations, and in the masterpiece of His that is the mystery of the Incarnation of the Son of God, so too does He associate priests with Himself to bring about an extension and a continuation of this mystery in each Christian, in whom the Son of God, in some manner, incarnates Himself by means of Baptism and by the Holy Sacrament of the Altar.

Mediatrix of All Graces
Just as the Eternal Father gave us His Son through her [the Virgin Mary], so too does He give Him to us through His priests. Even as all the graces that come forth to us from the Heart of God pass through the hands of Mary, so too are they given us by the ministry of priests. This in such wise that, just as Mary is the treasurer of the Most Holy Trinity, priests too bear this title.

The Sacrifice of Christ
Finally, it is through her that Jesus was offered to His Father at the first and last moment of His life, when she received Him in her sacred womb, and when she accompanied Him to the sacrifice that He made of Himself on the cross; and it is by means of priests that He is immolated daily upon our altars.

Mother of the Sovereign Priest
This is why priests, being bound by so intimate an alliance and so marvelous a conformity to the Mother of the Sovereign Priest, have very particular obligations to love her, to honour her, and to clothe themselves in her virtues, in her spirit, and in her dispositions. Humble yourselves that you should find yourselves so far removed from this. Enter into the desire to tend thereto with all your heart. Offer yourselves to her, and pray her to help you mightily.