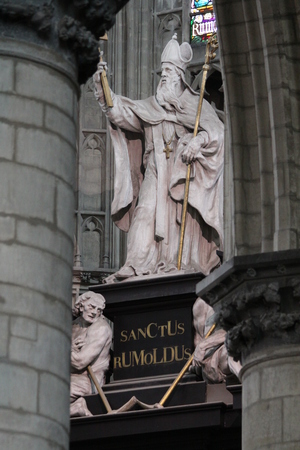 Troparion of Saint Rumold
Having come from the mists of green Ireland,
to scatter the mists of impiety,
thou didst evangelize, O Father Rumold,
and didst receive the gift of miracles.
The wicked whom thou didst reproach
their misdeeds and their vices
in the end killed thy body,
but could not kill thy great soul,
which God received into the bosom of Abraham.
Ancient Collect
May the glorious intercession of the blessed Rumold,
Thy bishop and martyr, O Lord,
drawn down upon us the favour of Thy majesty,
so that our ceaseless faults of weakness
may be covered by his unceasing prayer.
From Dublin to the Continent
We commemorate today Saint Rumold (or Rumbold), sometime Bishop of Dublin. He is one of the multitude of Irish saints who left their homeland to labour for Christ in continental Europe. At an early age Saint Rumold renounced the world and its vanities to follow Christ in voluntary poverty, in chastity, humility, and persevering prayer.
Evangelization and Contemplation
Tradition has it that he served God in Ireland until a powerful inspiration from on high compelled him to journey as a missionary to the idolators of the Brabant region of Belgium. Having received the Apostolic Blessing in Rome, he was sent forth as a missionary bishop without a fixed see. Periodically, Saint Rumold withdrew into solitude and silence so as to immerse himself in the love of God, and so renew his holy zeal for souls.
A Denouncer of Vice
On 24 June 775, the feast of Saint John the Baptist, Rumold was murdered by two wicked men, one of whom was a depraved adulterer whom he had called to conversion of life. His body was thrown into a river and, according to the Collect of the feast, miraculously recovered after three days. His relics are in the cathedral of Mechlin (Malines).
In the Liturgy
The feast of St. Rumold was celebrated as a double festival with an office of nine lessons throughout the province of Dublin before the reformation. It was extended to the whole Kingdom of Ireland in the year 1741.