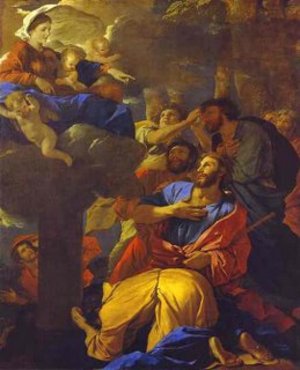 2 Corinthians 4:7-15
Psalm 125: 1-2ab, 2cd-3, 4-5, 6
Matthew 20:20-28
Treasure in Earthen Vessels
“We have this treasure in earthen vessels, to show that the transcendent power belongs to God and not to us” (2 Cor 4:7). Another translation puts it this way: “We have a treasure, then, in our keeping, but its shell is of perishable earthenware; it must be God, and not anything in ourselves, that gives it its sovereign power.” The contrast is striking: treasure held in earthen vessels. But what is the treasure? In verse 6, Saint Paul says, “It is the God who said, ‘Let light shine out of darkness,’ who has shone in our hearts to give the light of the knowledge of the glory of God in the Face of Christ” (2 Cor 4:6). The treasure, then, is the light of the knowledge of the glory of God shining in the Face of Christ.
An Eye-Witness of the Transfiguration
When one considers that James was an eye-witness of the Transfiguration, the deeper meaning of today’s First Reading comes into focus. While James looked on, together with Peter and with his brother John, Jesus “was transfigured before them, and His face shone like the sun, and His garments became white as light” (Mt 17:2). The splendour of Jesus’ Face burned itself indelibly into the heart of James. Contemplating the Face of the transfigured Jesus, James was filled with “the light of the knowledge of the glory of God” (2 Cor 4:6). This is the treasure that Saint James carried in a shell of fragile earthenware: his own human weakness.
Gethsemani
The Transfiguration reveals the treasure; the agony in the garden of Gethsemani reveals to us the fragility of the earthen vessels. To Peter, James, and John, Jesus said, “Remain here and watch with me” (Mt 26:38), but after His prayer to the Father, he found them sleeping. Again, a second time, He asked these, his intimate companions, to watch and pray, warning them of the weakness of the flesh, and again He came and “found them sleeping, for their eyes were heavy” (Mt 26:43). And so it happened a third time but, by then, the hour of Jesus’ betrayal was already at hand (Mt 26:45). The radiant memory of Jesus transfigured, “the knowledge of the glory of God” (2 Cor 4:6), was held in earthen vessels: in the hearts of men who could not watch even one hour with their Master in his agony.

Discouraged and Weary
Tradition recounts that after Pentecost Saint James went to preach the Gospel in far off Spain. There his work met with little response. In fact, the Apostle found hostility and active resistance to his preaching. James grew discouraged and, in his weariness, began to question his mission. In this, there is not a priest alive who, at certain moments, cannot identify with Saint James.
Our Lady of the Pillar
The Apostle was painfully aware of his own weakness; he knew himself to be an earthen vessel and, for a time, the bright memory of the Transfiguration seemed to have been eclipsed in his heart. It was at that moment that the Mother of Jesus — still alive at the time and living with his brother, Saint John — appeared to Saint James to comfort him in his mission. He saw the Blessed Virgin Mary atop a pillar. This tradition is at the origin of the sanctuary of Our Lady of the Pillar in Zaragoza, a place of pilgrimage even to the present day.
Prayer for Priests
Today’s feast invites us to pray for all priests who, in their mission, encounter indifference, resistance, criticism, hostility, and even persecution. So many priests suffer dejection. Some are called to share in the loneliness of Jesus in Gethsemani; their particular vocation is to repeat the words of their Master, brokenhearted in His solitude: “Insults have broken my heart so that I am in despair. I looked for pity but there was none; and for comforters but I found none” (Ps 68:20).
Mary, Comforter of Priests
All priests are in need of the encouraging presence of the Mother of God. She appeared to Saint James on a pillar of stone to give him something to lean on in his weakness and dejection. Strengthened by the Blessed Virgin, Saint James pursued his preaching in Spain, and then returned to Jerusalem to face his final sufferings.
The Science of the Cross: Mary and the Eucharist
Jesus said to the sons of Zebedee, “My chalice indeed you shall drink” (Mt 20: 23). For Saint James, the highest degree of the knowledge of the glory of God was found in Jerusalem: in drinking of the chalice of suffering and of a violent death. Suffering — what Saint Teresa-Benedicta of the Cross calls “the science of the Cross”– fills the soul with a dark brightness that, for all its obscurity, is nonetheless “knowledge of the glory of God” (2 Cor 4:6). It is nonetheless foolhardy and presumptuous to seek “the science of the Cross” without two things: entrustment (or consecration) of oneself to the all-holy Mother of God, and the sustenance of the Most Holy Eucharist.
Never at a Loss
Saint Paul describes the disciple’s participation in the Cross. “We are being hampered everywhere, yet still have room to breathe, are hard put to it, but never at a loss; persecution does not leave us unbefriended, nor crushing blows destroy us; we carry about continually in our bodies the dying state of Jesus, so that the living power of Jesus may be manifested in our bodies too” (2 Cor 4:8-11).
The Chalice of the Knowledge of the Glory of God
The Precious Blood of Christ, that flows eucharistically through the Church, is the communication to each one of us of the life of “the Son of Man who came not to be served but to serve, and to give his life as a ransom for many” (Mt 20:28). The knowledge of the glory of God is found in the face of the transfigured Christ; it is just as truly found in the chalice of the Blood that soaked the earth in Gethsemani and flowed on Calvary. And we, like Saint James, comforted by the Mother of Jesus, carry that treasure in earthen vessels.