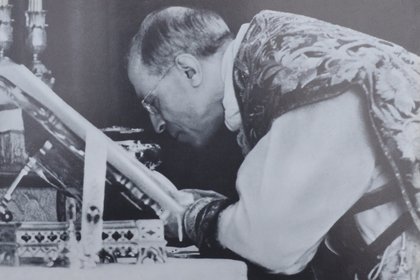 128. The divine Redeemer is ever repeating His pressing invitation, “Abide in Me.”[121] Now by the sacrament of the Eucharist, Christ remains in us and we in Him, and just as Christ, remaining in us, lives and works, so should we remain in Christ and live and work through Him.

129. The Eucharistic Food contains, as all are aware, “truly, really and substantially the Body and Blood together with soul and divinity of our Lord Jesus Christ.”[122] It is no wonder, then, that the Church, even from the beginning, adored the body of Christ under the appearance of bread; this is evident from the very rites of the august sacrifice, which prescribe that the sacred ministers should adore the most holy sacrament by genuflecting or by profoundly bowing their heads.

130. The Sacred Councils teach that it is the Church’s tradition right from the beginning, to worship “with the same adoration the Word Incarnate as well as His own flesh,”[123] and St. Augustine asserts that, “No one eats that flesh, without first adoring it,” while he adds that “not only do we not commit a sin by adoring it, but that we do sin by not adoring it.”[124]

131. It is on this doctrinal basis that the cult of adoring the Eucharist was founded and gradually developed as something distinct from the sacrifice of the Mass. The reservation of the sacred species for the sick and those in danger of death introduced the praiseworthy custom of adoring the Blessed Sacrament which is reserved in our churches. This practice of adoration, in fact, is based on strong and solid reasons. For the Eucharist is at once a sacrifice and a sacrament; but it differs from the other sacraments in this that it not only produces grace, but contains in a permanent manner the Author of grace Himself. When, therefore, the Church bids us adore Christ hidden behind the Eucharistic veils and pray to Him for spiritual and temporal favors, of which we ever stand in need, she manifests living faith in her divine Spouse who is present beneath these veils, she professes her gratitude to Him and she enjoys the intimacy of His friendship.

132. Now, the Church in the course of centuries has introduced various forms of this worship which are ever increasing in beauty and helpfulness: as, for example, visits of devotion to the tabernacles, even every day; benediction of the Blessed Sacrament; solemn processions, especially at the time of Eucharistic Congress, which pass through cities and villages; and adoration of the Blessed Sacrament publicly exposed. Sometimes these public acts of adoration are of short duration. Sometimes they last for one, several and even for forty hours. In certain places they continue in turn in different churches throughout the year, while elsewhere adoration is perpetual day and night, under the care of religious communities, and the faithful quite often take part in them.

133. These exercises of piety have brought a wonderful increase in faith and supernatural life to the Church militant upon earth and they are reechoed to a certain extent by the Church triumphant in heaven which sings continually a hymn of praise to God and to the Lamb “who was slain.”[125] Wherefore, the Church not merely approves these pious practices, which in the course of centuries have spread everywhere throughout the world, but makes them her own, as it were, and by her authority commends them.[126] They spring from the inspiration of the liturgy and if they are performed with due propriety and with faith and piety, as the liturgical rules of the Church require, they are undoubtedly of the very greatest assistance in living the life of the liturgy.

134. Nor is it to be admitted that by this Eucharistic cult men falsely confound the historical Christ, as they say, who once lived on earth, with the Christ who is present in the august Sacrament of the altar, and who reigns glorious and triumphant in heaven and bestows supernatural favors. On the contrary, it can be claimed that by this devotion the faithful bear witness to and solemnly avow the faith of the Church that the Word of God is identical with the Son of the Virgin Mary, who suffered on the cross, who is present in a hidden manner in the Eucharist and who reigns upon His heavenly throne. Thus, St. John Chrysostom states: “When you see It [the Body of Christ] exposed, say to yourself: Thanks to this body, I am no longer dust and ashes, I am no more a captive but a freeman: hence I hope to obtain heaven and the good things that are there in store for me, eternal life, the heritage of the angels, companionship with Christ; death has not destroyed this body which was pierced by nails and scourged, . . . this is that body which was once covered with blood, pierced by a lance, from which issued saving fountains upon the world, one of blood and the other of water. . . This body He gave to us to keep and eat, as a mark of His intense love.”[127]

135. That practice in a special manner is to be highly praised according to which many exercises of piety, customary among the faithful, and with benediction of the blessed sacrament. For excellent and of great benefit is that custom which makes the priest raise aloft the Bread of Angels before congregations with heads bowed down in adoration, and forming with It the sign of the cross implores the heavenly Father to deign to look upon His Son who for love of us was nailed to the cross, and for His sake and through Him who willed to be our Redeemer and our brother, be pleased to shower down heavenly favors upon those whom the immaculate blood of the Lamb has redeemed.[128]

136. Strive then, Venerable Brethren, with your customary devoted care so the churches, which the faith and piety of Christian peoples have built in the course of centuries for the purpose of singing a perpetual hymn of glory to God almighty and of providing a worthy abode for our Redeemer concealed beneath the eucharistic species, may be entirely at the disposal of greater numbers of the faithful who, called to the feet of their Savior, hearken to His most consoling invitation, “Come to Me all you who labor and are heavily burdened, and I will refresh you.”[129] Let your churches be the house of God where all who enter to implore blessings rejoice in obtaining whatever they ask[130] and find there heavenly consolation.