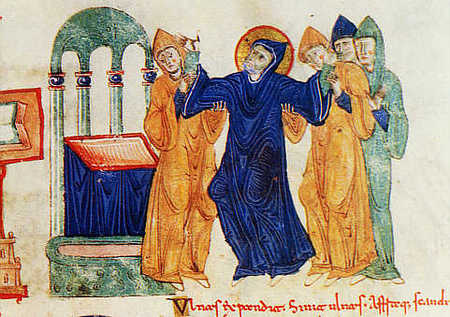 March 21
The Transitus of Our Holy Father Saint Benedict
My very dear Oblates, friends, and readers of Vultus Christi, tomorrow (21 March) we will celebrate the feast of the Transitus of our Holy Father Saint Benedict. Transitus means passing over, passage, or change. In the Christian tradition the word refers to the mystery of death. You all know the beautiful line from the Preface for the Dead that sings: The life of those who are faithful to you, O Lord, is but changed, not ended; and when their earthly dwelling-place decays, an everlasting mansion stands prepared for them in heaven. A change, not an end: such is the Christian perspective of death.

Change
Every change in our life here below, even the smallest, most insignificant changes are, in some way, a preparation for death. This is perhaps one of the reasons why we are so resistant to change, even to little changes. Having just moved to Ireland, I speak from firsthand actual experience. Every change, every detachment, every relocation, is a portent of death. We respond to change — not always consciously — with fear, because we fear death. In the Christian perspective, change is the price of life.

Saint Joseph
There is a striking connection between the feast of the Transitus of Saint Benedict and the Solemnity of Saint Joseph that we celebrated yesterday. In Saint Joseph we saw a man called to changes that uprooted his life, changes that obliged him to obey Angels, to journey by night; changes that involved insecurity and risk, changes that called him to the triumph of faith over fear. One need only think of the anxiety and uncertainty provoked by the flight into Egypt.

Uprootings
In celebrating our father Saint Benedict, we see a man marked, as was Saint Joseph, by a succession of uprootings and changes: from the life of a student in Rome to that of a solitary in the Sacro Speco at Subiaco; from solitude to life in community; and from his dear monastery of Subiaco to Monte Cassino. At Monte Cassino came the final change, the final pass-over, the transitus. Our blessed father Saint Benedict prepared all his life for death by a radical openness to change in obedience to the Holy Spirit.

Detachment
In the Holy Rule, Saint Benedict enjoins us to “keep death daily before our eyes” (RB 4:47). The measure of our preparedness for death is the measure of our openness to change or, if you prefer, our degree of detachment. Detachment is secured through obedience. For Saint Benedict obedience to tradition is the highest form of wisdom, and this because tradition — often incarnated in anachronistic signs and inherited customs and counter-cultural daily practices — distills for us the wisdom of the Cross. “The word of the Cross is folly to those who are perishing, but to us who are being saved it is the power of God” (1 Cor 1:18).

The Cross
The Cross shines forth as the sign of the change accepted by Christ when, “having received the vinegar, he said, ‘It is achieved’; bowed his head, and gave up his spirit” (Jn 19:30). The Cross is the place of the Transitus, the Pass-over of Christ into which all our little daily uprootings, changes, detachments, relocations, and pass-overs are assumed, and by which they are transformed.

Vow of Stability
The Benedictine vow of stability is, paradoxically, in function of change. Its end is not so much to keep us in one geographical place as it is to facilitate our perseverance in passing over, in the transitus that moves us out of what is old into what is new, out of darkness into light, out of death into life. The vow called “conversion of manners” is a commitment to continuous change at the level where change is most difficult, the level of the heart.

Change of Heart
It is a fearful thing to vow oneself to conversion, to a relentless change of heart. It means greeting each new day with a willingness to pass over, to cross a new threshhold, to leave things behind and to go forward, like Abraham, into the unknown land prepared for us by God.

Abraham
In the light of this feast of Saint Benedict, consider the example of Abraham to whom God said, “Go from your country and your kindred and your father’s house to the land that I will show you” (Gen 12:1). A blessing of immense proportions follows: “I will bless you, and make your name great, so that you may be a blessing” (Gen 12:2). The play on words with the name of Benedict, Benedictus meaning “blessed” is less obvious in English than in Latin, but it is there nonetheless. Change, made in obedience and faith, opens us to blessings beyond anything we can ask or imagine.

Priestly Prayer of Christ
The Holy Gospel takes us into the Cenacle and gives us the priestly prayer of Christ at the hour of his Transitus. The liturgy of the feast invites us to hear it as the prayer of our blessed Father Saint Benedict, offered at the hour of his passing. Saint Gregory describes his death — no, his pass-over: “;On the sixth day, he had himself carried to the oratory by his disciples, and there he received the Body and Blood of the Lord to make ready his departure. Then, resting his weakened members on the arms of his disciples, he stood up, and with his arms raised heavenward, murmured prayers in his last breath.”

A Eucharistic Death
Saint Gregory’s description of Saint Benedict’s death is wholly Eucharistic. Look closely. It takes place in the Oratory before the altar, like a monastic profession. Saint Benedict receives the Body and Blood of the Lord. This is his viaticum, nourishment for the last journey, sustenance for the pass-over. He stands before the altar with his hands raised toward heaven, in the gesture of the Suscipe: “Receive me, come for me, lift me up, take me to Thyself, Father!” This is also the gesture of the priest making the holy oblation at the altar. It evokes the arms spread wide of the Crucified Lord. Saint Gregory wants us to understand that, in death, Holy Father Benedict is utterly conformed to the crucified Jesus, and to Jesus in the Holy Sacrifice of the Mass.

Yes to Life Through Death
For us, every participation in the Holy Sacrifice of the Mass is a “Yes” to the Transitus of Christ — through the Cross to Resurrection — and a “Yes” to the transitus that awaits each of us at the hour of our death willed by God. In the meantime, the Sacred Body and Precious Blood of Christ strengthen us for all the little changes, relocations, and costly detachments by which the Holy Spirit brings about our conversion, and our configuration to Christ Jesus, from day to day.