Skip to content
HomeEucharistic Face of ChristThank you, Sister Emmanuel! 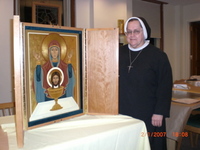 Thanks to the skill and generosity of Sister M. Emmanuel, A.S.C.J. of Mount Sacred Heart in Hamden, Connecticut, I was able to transport the icon of The Virgin Mother, Adorer of the Eucharistic Face of Christ to Rome. Sister Emmanuel crafted a beautiful wooden “ark” for the icon. She also provided a leather case to contain the wooden “ark” during travel. The folks at Aer Lingus were very kind about flying the Blessed Mother from New York to Rome.

By a special act of Providence, Sister Barbara Matazzaro, A.S.C.J. and I were on the same flight from New York to Rome. It was wonderful to travel with such a good friend. Sister Barbara was en route to the A.S.C.J. general house, which is quite near Santa Croce in Gerusalemme in Rome. 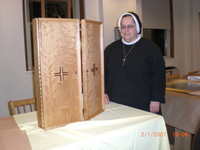 Sitting next to me on the flight from New York to Dublin was a French lady from Annecy, France. She was a self–declared “Buddhist” but when I spoke to her of Saint Francis de Sales and Saint Jeanne–Françoise de Chantal, she grew nostalgic. I gave her a reproduction of the icon and invited her to read Father Croset’s Act of Consecration to the Blessed Virgin. It moved her deeply. Before we parted, she said that she would reconsider her Catholic heritage.

During our five hour wait in the Dublin airport we crossed the road to Our Lady, Queen of Peace Church where the kind sacristan arranged for me to offer Holy Mass. I exposed the icon in front of the altar for Mass. Earlier, an Irish priest (now working in Nashville, Tennessee) had greeted us in the airport and asked us to pray for the Church in Ireland. I offered Holy Mass for that intention.

The Dublin church contained a lovely statue of our Lady of Loreto: a little bit of Italy already welcoming us to Ireland. Our Lady of Loreto is, as you may know, the patroness of aviators and of air travel. After Mass, Sister Barbara and I had breakfast in the airport.