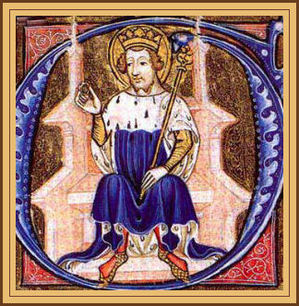 From the Lesson at Matins:
He Began With the Things of Religion
Edward greatly loved God, and was gentle-hearted, and free from any lust for power. He took the kingdom in the year 1042, being then about forty years old. Thereupon he set himself to repair the breaches which wars had made, and began with the things of God, being desirous that religion should rise from the low estate whereinto it had fallen.
Father of Orphans
Because of the abundance of his charity he was styled everywhere The Father of Orphans and Parent of the Poor, and he was never happier than when he had spent upon the needy the whole of his kingly treasures.
The Friendship of Saint John
He had a wonderful love toward John the Evangelist, so that he was used never to refuse anything for the which he was asked in that Saint’s name. Concerning this a marvelous tale is wont to be told. It is said that the Evangelist appeared to him once while in tattered raiment, and in his own name asked him for an alms. It befell that the King had no money, wherefore he took a ring from off his finger and gifted him therewith.
Repose in the Lord
Not long afterward the Evangelist sent the same ring back to him by a pilgrim, with a message concerning his death, which was then at hand. The King therefore commanded that prayers should be made for him, and then fell blessedly asleep in the Lord, upon the very day which had been foretold to him by the Evangelist, that is to say, on January 5th, in 1066.
Westminster Abbey
In 1161 he was canonized, and on October 13th, two years later, his body, which was said to have been found incorrupt, was by Saint Thomas Becket translated to Westminster Abbey, where it is still enshrined behind the high altar.
On 17 September 2010, His Holiness, Pope Benedict XVI visited Westminster Abbey, and prayed at the tomb of Saint Edward the Confessor.