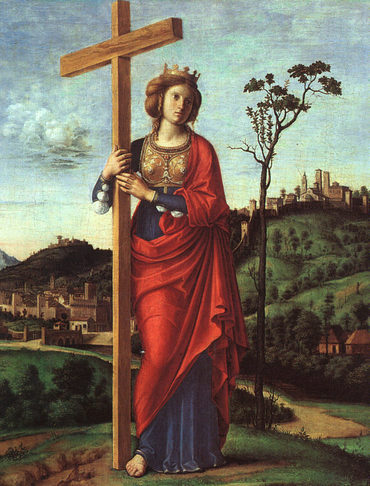 The feast of Saint Helena is August 18th. When I lived at Santa Croce in Gerusalemme in Rome, it was celebrated with all due solemnity. Evelyn Waugh has a marvelous novel entitled Helena, based on her life. It is well worth reading.

Most of the fragments of the True Cross that we venerate in our churches derive from the Wood of the Cross kept in Rome since the early fourth century. When one sees, as I have, the faith of pilgrims coming from all over the world to venerate the Wood of the Cross at the Basilica of Santa Croce in Gerusalemme, when one witnesses their tears and hears their prayers before the relics of the Passion and Cross, there is no doubt that we are in the presence of a great and holy sign, the pledge of a life-giving mystery.

Saint Ambrose Speaks
Saint Helena, the mother of the Emperor Constantine, was already an old woman when she set out for Jerusalem intent on excavating the holy places of Christ’s Passion. Saint Ambrose relates Saint Helena’s discovery of the true Cross;

Helena burned with desire to touch the remedy of immortality, but feared to tread on the sacrament of salvation. Joyful in her heart, but fearful in her steps, she knew not what to do; she came nonetheless to the throne of truth. Helena began to visit the holy places and, from the Holy Spirit, had the inspiration to search for the Wood of the Cross. She arrived at Calvary and said, “Behold the place of the battle, where is the victory? I seek the standard of salvation and find it not. I am on the throne and the Cross of the Lord is in the dust? I am in the midst of gold and the triumph of Christ among the ruins? See the devil’s deed; he has buried the sword by which he was brought to nothing. Let the debris be cleared away so that life may appear; let the sword that severed the head of the true Goliath be brought to light; let the earth split open that salvation may shine forth.

The Indomitable Empress
Helena herself supervised the excavations. She found three crosses and the titulus, the tablet bearing the inscription: “Jesus of Nazareth, King of the Jews.” That titulus is preserved today at Santa Croce in Gerusalemme. Immediately she thought that, since Providence had put the wood of the Cross and the titulus in her hands, she could do nothing better than carry them back to Rome, together with a shiphold full of earth from Jerusalem. Once in Rome, Helena directed that the earth from Jerusalem serve as the foundation of a church built on the site of her imperial palace. The present basilica of Santa Croce in Gerusalemme stands on the same site. Parts of the original basilica built by Saint Helena remain to this day.

Bernard, Lover of the Crucified
It is significant that the Roman basilica containing the Church’s most precious relics, those of the Passion of Christ — the wood of the Cross, the tablet suspended from it, the nails, and thorns from the crown — should be entrusted to the sons of Saint Bernard, the passionate lover of the Crucified. Everything in Santa Croce sings the mystery of the triumph of the Cross. Wherever one turns, one sees the glorious Cross depicted in marble, in carved wood, in paintings, mosaics, and embroidery. Santa Croce is, of all the churches in Christendom, the one that most eloquently speaks the Word of the Cross and radiates its mystery.

Helena, Herald of the Mystery of the Cross
Saint Helena was not merely collecting relics for posterity. Her discovery of the True Cross saved the Orthodox Catholic faith from being submerged in a sea of speculative philosophies that denied the true Flesh and Blood of Christ. Saint Helena’s discovery points to the God who became man and suffered death on a real cross in a particular place at a precise moment in history. Mary Magdalene, the Apostle to the Apostles was the herald of Christ’s resurrection; Saint Helena became the herald of the mystery of the Cross.

The Proper of the Mass
The Mass of Saint Helena is, from beginning to end, a liturgy of the Cross. The Collect, calling the True Cross “a hidden treasure beyond price” is connected to the Gospel of the “treasure hidden in the field” (Mt 13:44). In the Entrance and Offertory Antiphons Saint Helena says: “God forbid that I should make a display of anything, except the Cross of our Lord Jesus Christ” (Gal 6:14) and, “I had no thought of having any other knowledge than that of Jesus Christ, and of him crucified” (1 Cor 2:2) In the Communion Antiphon drawn from the Canticle of Canticles Saint Helena says, “I will climb the palm tree and gather its fruit” (Ct 7:8).

The Fruit of the Tree of Life
This is, for us, the reality of every Mass. We need not go to Jerusalem, nor even to Santa Croce in Gerusalemme in Rome to gather the fruit of the Tree of Life. It is given us in the Holy Sacrifice of the Mass. May Saint Helena obtain for us the grace of a worthy participation in the holy mysteries today. Tasting of the fruit of the Cross, may it be given us to enter more deeply into its mystery and make it shine forth.