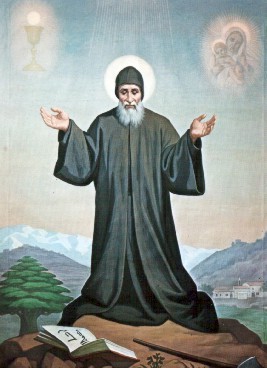 Today’s Saint
Saint Sharbel the Miracle-Worker has followed me from the earliest days of my monastic journey. I remember learning of his beatification at the close of the Second Vatican Council in December 1965. Saint Sharbel’s three inseparable loves, depicted in this image — the Most Holy Eucharist, the Blessed Virgin Mary, and the Word of God — are the mystical treasure of those who seek, in some way, to follow him in a life of silence and adoration.
Collect from the Missale Romanum 2002
O God who called your priest, Saint Sharbel to the singular combat of the desert and imbued him with every manner of piety, grant us, we beseech you, that by striving to be imitators of the Passion of the Lord we may be found worthy of becoming sharers in his kingdom. Through our Lord Jesus Christ, your Son, who lives and reigns with you in the unity of the Holy Spirit, God, forever and ever.
Ex Oriente Lux
Saint Sharbel (also spelled Charbel) of Lebanon is one of those in whom the Holy Spirit fashioned a heart of flesh, a heart exquisitely sensitive to the mystery of Divine Love. The hermit priest Sharbel was beatified by Pope Paul VI on December 5, 1965, at the close of the Second Vatican Council. It was as if Paul VI wanted the Council to end with Rome gazing Eastward.
Another Saint Anthony of the Desert
Just before the beatification, a prelate at the Congregation for the Causes of Saints in Rome said to Bishop Francis Zayek, the shepherd of Maronite Catholics in the United States, “Reading about the holy hermits of the desert, we used to consider many reported facts as mere fables. In the life of Blessed Sharbel, however, we notice that these facts are authentic and true. Blessed Sharbel is another Saint Anthony of the Desert, or Saint Pachomius, or Saint Paul the Anchorite. It is marvelous to observe how you, Maronites, have preserved the same spirituality of the fathers of the desert throughout the centuries, and at the end of the nineteenth century, 1500 years later, produced a Sharbel for the Church.”
A New Turning
Meanwhile, in Kentucky, a Trappist monk was emerging from a long period of spiritual depression. Thomas Merton had been in the Abbey of Gethsemani for nine years. He wrote in his journal, “Sharbel lived as a hermit in Lebanon — he was a Maronite. He died. Everyone forgot about him. Fifty years later, his body was discovered incorrupt and in short time he worked over 600 miracles. He is my new companion. My road has taken a new turning. It seems to me that I have been asleep for 9 years — and before that I was dead.” Sharbel, the 19th century hermit of Lebanon, pulled America’s most famous 20th century monk out of a spiritual crisis. That is the communion of the saints!
Like a Lebanon Cedar
On October 9, 1977, Pope Paul VI canonized Sharbel, citing the psalm, “The just will flourish like the psalm tree and grow like a Lebanon cedar” (Ps 91:13). The New York Times gave extensive coverage to the canonization in Rome and to the corresponding festivities in Lebanon, days of celebration that brought Orthodox and Catholic Christians together with Muslims.
Holiness in Clusters
Saint Sharbel’s influence continues to grow. In Russia he has an immense following of Orthodox Christians. Muslims continue to seek his intercession, going in pilgrimage to his tomb. In Lebanon and in the Lebanese diaspora he continues to teach the way of silence, the way of the Cross, the way of humble love. On May 10th, 1998, Pope John Paul II beatified Saint Sharbel’s professor, the monk, Father Nimutallah al-Hardini. Holiness grows in clusters.
A Eucharistic Death
Saint Sharbel suffered a stroke on December 16th, 1898 while celebrating the Holy Liturgy. He was reciting the prayer, “Father of Truth, behold your Son, a sacrifice pleasing to you. Accept this offering of Him who died for me.” He fell to the floor holding the Holy Eucharist in his hands. He died on December 24th. Sharbel had lived twenty-three years in solitude. A lifetime of saying “Yes” to Love prepared him for a fully Eucharistic death and an abiding mission in the Church, one that, even today, is prophetic.