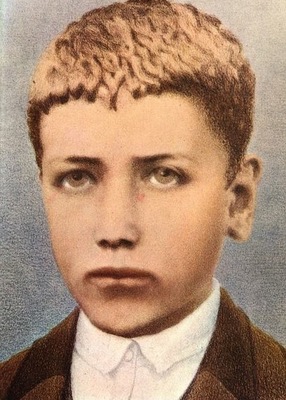 “How beautiful God is, how beautiful!
But He is sad because of the sins of men.
I want to console Him, I want to suffer for love of Him.”
Blessed Francisco Marto

The Boy Who Saw the Mother of God

Blessed Francisco Marto, the boy who saw the Mother of God, was born in Aljustrel, in the parish of Fatima, Portugal on June 11, 1908. Together with his sister, Blessed Jacinta, he first learned of the things of God in his own family. Visited three times by the Angel of Portugal and then by the Blessed Virgin Mary herself over a period of six months beginning on May 13, 1917, Francisco began to pray and offer sacrifices for the conversion of sinners, for the consolation of Jesus, and in reparation to the Immaculate Heart of Mary.

The Consoler of the Hidden Jesus

The Angel’s words, “Console your God,” seem to have burned themselves into Francisco’s heart. Of the three children of Fatima, his grace is, I think, the most explicitly Eucharistic. Francisco sought, more than anything else, to be the consoler of “the Hidden Jesus” by adoring Him in the tabernacle of the parish church, and by praying the Rosary. It is this call to console “the Hidden Jesus” that, more and more, has endeared Francisco to me.

The Chalice and the Precious Blood

In the autumn of 1916, the Angel of Portugal appeared for the third time to the three children. He was holding a chalice with a Host suspended above it; from the Host drops of Blood fell into the chalice. The Angel, leaving the chalice and Host suspended in the air, fell prostrate in adoration. He then gave Holy Communion to the three children. To Lucia he gave the Host. To Francisco and Jacinta he presented the chalice saying, “Take and drink the Body and Blood of Jesus Christ, horribly outraged by ungrateful men. Repair their crimes and console your God.” A few days later, while discussing this mysterious Communion of Reparation from the Chalice of the Precious Blood, Francisco said to Lucia, “I felt that God was within me, but I didn’t know how!”

Our Lady’s words, that Francisco would have to say “many rosaries” before going to heaven, have given rise to all sorts of interpretations, some of which cast a shadow over the little nine-year-old boy. Fatima specialist and author Leo Madigan gives the clearest and most sensible explanation. He writes that, “Francisco would go to heaven, but there was time for many Rosaries before that happened.” Our Lady words contained no veiled threat, no ominous warning. She spoke to Francisco as a mother. While waiting to go to heaven, he had time to pray many Rosaries. For Francisco, that knowledge was a gift and a joy. Francisco died, after praying his “many Rosaries,” on April 4, 1919.