June 17th is the dies natalis of Marie-Adèle Garnier, Mother Mary of St. Peter, Foundress of the Adorers of the Sacred Heart of Jesus of Tyburn, O.S.B. In 1913 Blessed Columba Marmion wrote to one of her spiritual daughters, saying, “The special characteristic of your Mother is heroic confidence in the midst of impossibilities.”

Monastic Roots
Marie-Adèle Garnier was born in France on the feast of the Assumption of the Blessed Virgin Mary, August 15, 1838. She was baptized on the feast of the Holy Name of Mary, September 12. Marie-Adèle’s native Burgundy is the land of Cluny, of Cîteaux, and of Paray-le-Monial. Her life was marked, from the very beginning, by an environment shaped by the Rule of Saint Benedict, by the ardour of Saint Bernard, and by the mystery of the Sacred Heart of Jesus.
The Heart of Jesus and the Eucharist
As a young woman, Marie-Adèle grew in awareness of the Eucharistic Heart of Jesus, Priest and Victim: the Sacred Heart truly present in the Sacrament of the Altar where ceaselessly He glorifies the Father and intercedes for all men. Marie-Adèle was impelled by the Holy Spirit to seek a life wholly illuminated by the Sacrifice of the Mass, and marked by perpetual adoration of the Blessed Sacrament.
Happy, So Happy
In 1872, Marie-Adèle, after having read an article on the proposed basilica of Montmartre, heard an inner voice saying to her: “It is there that I need thee.” “At the same moment,” she writes, “I saw an altar raised on high and sparkling with lights, dominated by the Blessed Sacrament exposed in the monstrance. I felt so overcome by this that I had to lean against the door to save myself from falling. And then I felt so happy, so happy, that I could make nothing of it.”
Like many of her contemporaries drawn to the Sacred Heart of Jesus, Marie-Adèle heard the interior summons to a life of reparation and doxology. “I felt Jesus speaking to my heart, illuminated by a light of surpassing brightness; He told me that it was His Will that His Heart present in the Holy Eucharist should be the object of the worship of Montmartre, and that the Blessed Sacrament should be exposed there night and day.”
Salutary Failure
Marie-Adèle first attempted to respond to her vocation by living in solitude on Montmartre, close by the site of what would become the Basilica of the Sacred Heart. God allowed her to experience a salutary failure without, however, withdrawing the attraction to a life of reparation and adoration at Montmartre. Her first sojourn at Montmartre ended on the feast of the Compassion of the Blessed Virgin Mary, September 15, 1876. 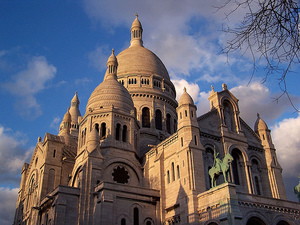 Beginnings
In 1898, having returned to Montmartre with a companion, Marie-Adèle began a hidden life of adoration, reparation, and intercession for the Church under the special protection of Saint Peter the Prince of the Apostles, and Saint Michael the Archangel. From the beginning the Rule of Saint Benedict inspired and guided the new monastic family. On June 9, 1899, Marie-Adèle, now known as Mother Mary of St. Peter, and her first daughters, made their profession in the crypt of the Basilica of the Sacred Heart at the altar of Saint Peter. Two days later, June 11, Pope Leo XIII consecrated the whole human race to the Sacred Heart of Jesus.
Tyburn
The anti-clerical laws of 1901 obliged the fledgling community to leave Montmartre for England. Mother Mary of St. Peter and her daughters established themselves at Tyburn in the heart of London on the site of the cruel torments and death of England’s glorious Catholic Martyrs. Her companion, Mother Agnes, wrote, “And we ourselves, little as we were, but supporting our littleness on the Heart of Jesus, we, too, were coming to labour, within the limits of our vocation, in the great work of the conversion of England.”
Blessed Columba Marmion
From 1908 onward, Mother Mary of St. Peter was under the direction of the Benedictine Abbot Blessed Columba Marmion. It was to Abbot Marmion that she wrote on December 23, 1909: “In spite of this humiliating burden of misery and worries, my soul dwells in her God, because He supports her, holds her up, carries her, sustains her in a life of faith, of love, of confidence, not sensibly consoling, but supremely happy!”
Happy With God and With My Children
Abbot Marmion died in 1923, leaving Mother Mary of St. Peter and her daughters to mourn his passing and, at the same, to live in gratitude and joy from his spiritual patrimony. The following year on June 17, after much suffering, Mother Mary of St. Peter died. Her last intelligible words were: “I am so happy with God! And with my children.” Today Mother Mary of St. Peter’s Benedictine Congregation of the Adorers of the Sacred Heart has monasteries in England, Scotland, Ireland, Australia, Peru, New Zealand, Ecuador, Colombia, and Rome, Italy.