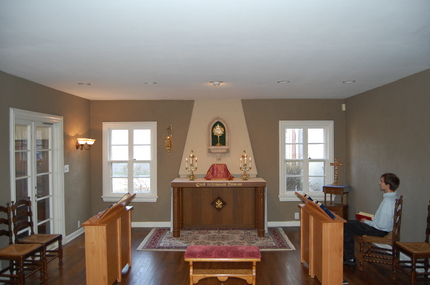 Oratory of the Monastery of Our Lady of the Cenacle

Our First Meeting
On Sunday afternoon a group of four men and three women participated in the first meeting of the Benedictine Oblates of the Monastery of Our Lady of the Cenacle. Two other men living in the far off states of Pennsylvania and Colorado were unable to be present. (I was also mindful of Jane in France and of Vincent in Texas.) I gave an historical overview of the Benedictine oblateship, directing my remarks principally to Chapters 58 and 59 of the Rule of Saint Benedict. I then presented Article I of the Statutes of the Oblates and offered a modest commentary on the text.

CHAPTER I: THE OBLATE
1. The Benedictine tradition sees Oblation as an act intimately tied to the altar of the monastery and to the mystery of the Most Holy Eucharist (cf. RB 58:20-21; 59: 1-2). Oblation is a free act of self-offering to God, patterned after the sacrifice of Jesus Christ, Priest and Victim, from the altar of the Cross.
Fundamentally the call to oblation springs from the injunctions of Saint Paul: “I appeal to you therefore, brethren, by the mercies of God, to offer your bodies as a living sacrifice, holy and acceptable to God, which is your spiritual worship” (Rom 12:1); and again, “Walk in love, as Christ also hath loved us, and hath delivered Himself for us, an oblation and a sacrifice to God for an odour of sweetness” (Eph 5:2).
The Benedictine Oblate, drawn to the altar of Christ’s Sacrifice by the Holy Spirit, lives from the altar, in communion with a particular monastic community, for the glory of the Father and for the sake of the whole Body of Christ, that is the Church.
The Church recognizes Oblation as a special bond expressing communion between individual Christians and a particular monastery (cf. CCL, can. 303; can. 677 §2).

A Eucharistic Vocation
The Eucharistic character of the oblateship is grounded in Saint Benedict’s rite of monastic profession (RB 58) and in the analogous rite that he prescribes for the offering of a boy, by his parents, to God in the monastery (RB 59). The adult monk making profession and the young lad being offered to God by his parents are identified with the Eucharistic oblation. Symbolically, they are placed alongside the bread and wine (oblata) on the altar, becoming part of the Holy Sacrifice.
The adult monk places the handwritten petition of his offering on the altar, while the hand of the little oblate is wrapped in the altar linen together with the petition drawn up by his parents.
United to Christ, Priest and Victim
By offering himself in the context of the Holy Sacrifice, the monk participates in the eternal priesthood and victimhood of Our Lord Jesus Christ; like Jesus Crucified, he is both the offerer and the offering. Similarly, in the time of Saint Benedict he child oblate, offered by his parents, who exercised a certain natural priesthood over him, became with Christ a single offering to the Father.
Abbot Delatte, in his Commentary on the Holy Rule, speaks of the newly-professed monk as, “a living victim, ‘a pure, holy, and unspotted victim,’ reunited to the victim on the altar, offered and accepted with that victim, and enwrapped by the deacon in the fragrance of the same incense.”
Interior Priesthood
Mother Mary of Saint Peter (Adèle Garnier, 1838-1924), the foundress of the Benedictine Adorers of the Sacred Heart of Tyburn, was graced with stunning insights into the interior grace of a priestly and victimal life. She writes:

He made me understand that there is an intimate and universal priesthood, absolutely and necessarily united to His, which should be the portion of all souls, but which is so of only very few. This priesthood is wholly interior, and is only granted to a soul who consents to it, who has desired it, and who to obtain it wills to immolate itself at all times with Jesus; that even so, in reality it is not the soul who immolates itself but Jesus who immolates it with Himself. But as the soul wills to be immolated and abandons itself for that purpose, Jesus makes it participate in His state of victim and priesthood at one and the same time. He consecrates it and ordains it to an interior priesthood which conforms it to His Eucharistic life more than any other gift it has received. . . . This grace of interior priesthood does not imprint on the soul an indelible character, for the soul can lose it by infidelity. But if it is constantly faithful to this grace of choice, it will receive through all eternity the reflection of the sacerdotal glory emanating from the Heart of Jesus and spreading over all souls who are priests and victims with Him.

The Altar
The Benedictine Oblate, like the monk, consummates his mystical offering on the altar of the oratory of the monastery. Oblation communicates to one’s whole life the character and virtue of a holocaust; it makes of one’s life a perpetual sacrifice. All who are offered from the same altar constitute a single priestly and victimal body: one monastic family. A monastery, then, is born at the altar, and lives from the altar.

The vocation of the Benedictine Oblate is, then, profoundly Eucharistic. Blessed Dom Marmion says:

Let us unite our sacrifice with that of Christ Jesus. Let us offer ourselves with Him “in the spirit of humility, and with a contrite heart that our sacrifice may be pleasing in the sight of the Lord.”

O Eternal Father, receive not only Thy Divine Son, but ourselves with Him of Whom say that He is ” a pure Victim, a holy Victim, an immaculate Victim.” Of ourselves, we are only poor creatures, but, miserable as we are, Thou wilt not reject us, for the sake of Thy Son Jesus Who is our Propitiation, and to Whom we would be united, so that through Him, and with Him, and in Him, all honour and glory be to Thee, O Father Almighty, in the unity of the Holy Ghost.” (Christ, the Ideal of the Monk, p. 119)