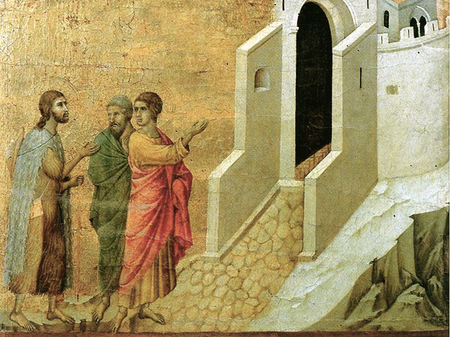 The Voice of Christ
In today’s Introit, the fourth one of the ongoing Paschal solemnity, we hear the voice of none other than Our Lord Jesus Christ Himself. Today’s text is extraordinary in that it is one of the very few Introits drawn from the Gospels. It comes from Chapter 25 of Saint Matthew. The context is that of the Last Judgment. The words are those of Christ the King, of the Son of Man coming in His glory, and all the angels with him. He is seated upon the throne of His glory. All the nations are gathered in His presence.

Come to Me
How are we to understand this Introit today? Our Lord is addressing the newly-baptized. His first word to them is, “Come.” Venite, benedicti Patris mei. Where else do we hear this same word, Venite, in the mouth of Jesus? In Matthew 11:28: “Come to me, all you that labour and are burdened; I will give you rest.” I see Our Lord pronouncing this word with His arms spread wide in a gesture of welcome. The hands nailed to the wood of the Cross shine with His glorious wounds. His Holy Face is radiant. A torrent of light flows from His Open Side. When He says, “Come,” who can resist His invitation?

Every Spiritual Blessing
Our Lord calls the newly-baptized benedicti Patris mei, blessed of my Father. Is not this what Saint Paul develops in the first chapter of his Epistle to the Ephesians? “Blessed be that God and Father of our Lord Jesus Christ, who has blessed us, in Christ, with every spiritual blessing, higher than heaven itself” (Eph 1:3). There is no greater blessing than incorporation into the Body of Christ that is the Church. The children of the Church, the Bride of Christ, are nourished from the altar of His Sacrifice with the mysteries of His Body and Blood. It is in the Eucharist that we are blessed, here and now, with every spiritual blessing, higher than heaven itself.

Here is a photo of the little Oratory of the Cenacle where I offer Holy Mass, sing the Divine Office, and make my daily adoration.

Sacrament of the Kingdom
To receive the Body and Blood of Christ in Holy Communion is to receive “the kingdom prepared for you since the foundation of the world” (Mt 25:34). The Most Holy Eucharist is a foretaste of heaven. It is already the “Wedding Banquet of the Lamb” (Ap 19:9). The Orthodox theologian, Father Alexander Schmemann, calls the Eucharist, “the ascent of the Church to the heavenly altar.” The kingdom prepared for us since the foundation of the world is offered to us sacramentally in the Holy Sacrifice of the Mass. The Mass is the Church assumed into heaven, and heaven filling the Church.

Since the Foundation of the World
The little phrase, “prepared for you since the foundation of the world” (Mt 25:34) tells us that creation itself, from the very beginning, was ordered to the Eucharist. Every created thing has a Eucharistic finality; every created thing is ordered to the priesthood of Christ. The Sacrament of the Eucharist recapitulates the purpose of God, the design of His Love, in creating man and in redeeming him. Only the Mass makes sense of history. Only the Mass gives meaning to all things.

The Canticle of the Three Young Men
This is why the Church enjoins the priest to say daily, as part of his thanksgiving after Mass, the Canticle of the Three Young Men, the Benedicite. Blessed Abbot Marmion remained faithful to this all his life. In Christ, the Life of the Soul, he writes, “The Church, the Bride of Christ, who knows better than anyone the secrets of her Divine Bridegroom, makes the priest sing in the sanctuary of his soul where the Word dwells, the inward canticle of thanksgiving. The soul leads all creation to the feet of its God and its Lord, that He may receive homage from every creature.”

The Bread of Angels
The Eucharistic motif of today’s Introit becomes explicit in the Offertory Antiphon. (This is why I said yesterday that the Proper of the Mass is an integral whole.) As the priest goes to the altar today, the Church sings, “The Lord opened the doors of heaven and rained manna on them for food; he gave them the bread of heaven, man ate the bread of angels, alleluia” (Ps 77:23-25). The priest goes to the altar precisely for this: that the Lord might open before him, for the sake of all those who stand behind him, the doors of heaven. The true Manna, the Bread of Heaven, the Bread of Angels, descends from heaven to become the food of mortal wayfarers.

Year of the Eucharist and Year of the Priest
One final thought: when the Servant of God Pope John Paul II announced the Year of the Eucharist in 2004, he placed it under the sign of today’s Gospel of Emmaus. He asked the whole Church to take up the prayer of the disciples on the road: Mane nobiscum, Domine (Lk 24:29) — “Abide with us, Lord.”

Examination of Conscience
We would do well today, five years after the Year of the Eucharist, to make an examination of conscience based on Pope John Paul II’s Apostolic Letter, Mane Nobiscum, Domine.
— Are we conscious of the Eucharistic finality of all we think, say, and do?
— Have we grown in the grace of Eucharistic amazement?
— Has the tabernacle become for us, to use Pope John Paul’s expression, “a kind of magnetic pole attracting an ever greater number of souls”?
— What have we done to respond individually and corporately to the call to Eucharistic adoration?
— What have we done with the unique grace offered us five years ago?
— How has it changed us?