A Tale of Two Cardinals
Before writing about Saint Peter Damian whose feast we are keeping today, I want to acknowledge the birthday of the Venerable John Henry Newman, born in London on February 21st in 1801. I picture the two cardinals in Paradise; the one quintessentially British, given to careful reflection and sober understatement; the other, Italian, blazing like lightning and hurling thunderbolts in his zeal for reform.

When Grace Perfects Nature
Although both men received the cardinal’s red hat, their tastes and temperaments could not have been more different. In art, the fierce and passionate Peter Damian — a man rather given to extremes — is often depicted brandishing a discipline or knotted scourge. I see the gentle Newman, on the other hand, seated in his study with a comfortable cup of tea near at hand. It’s all splendidly Catholic.

Love of Christ and of the Church
Today’s Collect expresses the two guiding principles of Saint Peter Damian’s life:

Grant us, we beseech Thee, almighty God,
to follow the counsel and example of the blessed bishop Peter,
that by preferring nothing whatever to Christ
and always set upon the service of Thy Church,
we may come, at length, to the joys of eternal light.

The Monk
The first principle comes directly from the fourth chapter of the Rule of Saint Benedict: “To set nothing before the love of Christ” (RB 4:21). Before being or doing anything else, Peter Damian was a monk, a son of Holy Father Benedict. He belonged to the white-habited Camaldolese who, down through history, have given so many holy monks and solitaries to the Church.

The Reformer
The Church that Peter Damian loved and served was beset with troubles and scandals of all sorts: sacred offices being bought and sold, a clergy addicted to gambling, wine, concubinage, and other vices best left unmentioned, and the widespread collapse of monastic discipline. He wrote a book on the sexual immorality of the clergy that is shocking — even by today’s troubling standards.

Reform Begins in Silence
In every age of the Church there are conditions that, while they demand reform, also stir up a lot of talking. True reform comes not from much talking, but from much silence. Holy Father Benedict says that “if you talk a lot you will not escape falling into sin” (RB 6:4).
A tongue obedient to the Holy Spirit can do immense good; a tongue that wags this way and that is, as Saint James says, “a restless evil, full of deadly poison” (Jas 3:8). Authentic prophecy begins in silence; true reform begins with holding one’s own tongue. 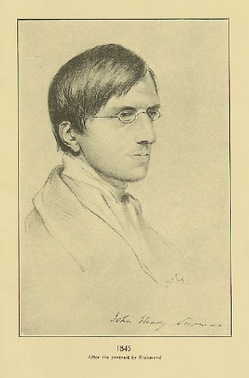 The Work of Redeeming Love
There comes a moment when even the conversation of the saints and prophets must return to the silence whence it springs. In that silence, redeeming Love carries out the work of making whole all that is fragmented, of healing the weak and wounded members of Christ’s Mystical Body.

Ye, Who Would Weed the Vineyard’s Soil
Cardinal Newman has a little poem that addresses the tension between zeal and meekness, speaking and silence. I wonder if in paradise he has recited it for Saint Peter Damian.

CHRIST bade His followers take the sword;
And yet He chid the deed,
When Peter seized upon His word,
And made a foe to bleed.
The gospel Creed, a sword of strife,
Meek hands alone may rear;
And ever Zeal begins its life
In silent thought and fear.
Ye, who would weed the Vineyard’s soil,
Treasure the lesson given;
Lest in the judgment-books ye toil
For Satan, not for heaven.