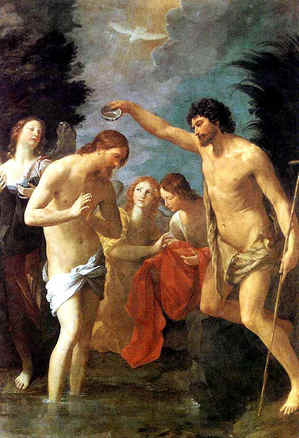 At Matins this morning there were two stupendous readings from Benedictine sources: one from Saint Peter Damian, Bishop (1007-1072), and the other from Saint Bede the Venerable (672-735).
Years ago I taught several courses in homiletics to seminarians and to candidates for the permanent diaconate. More often than not their question was: “How can we learn to preach well?” Invariably I would give them the same answer in three points: 1) Read the Fathers; 2) Read the Fathers; and 3) Read the Fathers. With the passing years I have become, if anything, even more convinced that one must learn the art of preaching in the school of the Holy Fathers.
Saint Peter Damian
First off, Saint Peter Damian captivated me with his magnificent rhythmed prose. Here is the opening of his sermon:

O singular humility! The Word was made flesh and, having come forth as the Perfect Man, forsook the mass of men and sought out John, desired John, went towards John.

He closes with a veritable litany of praise in honour of Saint John the Forerunner. I will give only my English translation, trying to do justice to the text:
Patriarch, Prophet, and Angel

Listen!
John is a patriarch,
even more is he the realization and summit of the patriarchs;
he is a prophet, and more than a prophet,
because he pointed out with his finger the One whose advent he announced;
he is an angel, et even the one chosen among the angels,
and the Lord Himself bears witness to this, saying,
“Behold, I send out my angel to prepare my way before my Face.”

John is an apostle,
and even the first of apostles and their prince,
because, “there was a man sent by God”;
he is an evangelist,
and again the first harvester of the Gospel,
the first to preach the Gospel of the Kingdom;
he is a virgin, and the very ensign of of virginity,
the hallmark of modesty, the example of chastity.

John is a martyr, and the light of martyrs,
the pattern of the most constant witness between the birth of Christ and His death;
John himself is Elias,
a lamp burning and giving light,
the friend of the Bridegroom,
the one who prepares the Bride.

The monastic Office contains not one, but two patristic readings on Sundays and the greater feasts. There is the reading of the Second Nocturn, corresponding to the Second Reading in the Roman Liturgy of the Hours, and there is a patristic homily on the Gospel of the day, read after the three Old Testament canticles of the Third Nocturn, and before the Te Deum. Then follows the Holy Gospel itself, at the end of which there is an Amen, and the ancient hymn in praise of the Most Holy Trinity, the Te Decet Laus. 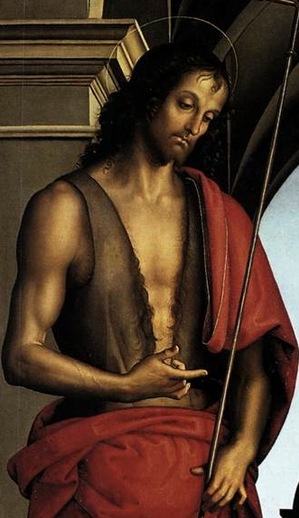 Saint Bede the Venerable
In the homily on the Gospel (Mark 1:1-18), Saint Bede the Venerable speaks of the solitary life. It is noteworthy that he admits of two forms of solitary life. The first, he says, is that of those who withdraw into the desert, a word that we must here take to mean monasteries, cloisters, anchorholds, and the like. The second, is that of those who, without leaving the world, but rather remaining in the midst of it, spurn its desires and cleave to God alone in the cloister (or hidden place) of the heart.
God Alone

Typically furthermore, the desert where John dwelt
represents the life of holy men cut off from the pleasures of the world:
whether they live as solitaries or in the midst of crowds,
ceaselessly, by the soul’s intent, they spurn the desires of this present world;
they find their joy in cleaving to God in the secret place of the heart,
and in Him alone do they place their hope.

It is towards this solitude of the soul, so cherished by God,
that the prophet, succoured by the Holy Spirit, says:
“Who shall give me wings like those of the dove,
that I may take my flight and be at rest?” (Ps 54:7)
And, cheering himself that he has, with God’s help,
arrived there so quickly,
he adds, by way of deriding the webs of earthly desires:
“Behold, I have fled far way,
and made my abode in solitude” (Ps 54:8).