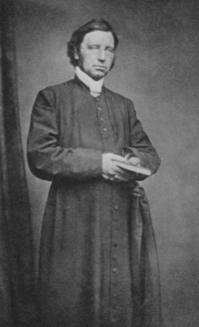 Those noble hymns, which had solaced anchorites on their mountains, monks in their cells, priests in bearing up against the burden and heat of the day, missionaries in girding themselves for martyrdom–henceforth became as a sealed book and as a dead letter.

(John Mason Neale,1818-1866)
A Disaster
One of the most scandalous post-conciliar ruptures with liturgical continuity occurred with the publication of the American edition of the Liturgy of the Hours by the Catholic Book Publishing Company in 1975. The American Catholic clergy and faithful were given four volumes flawed by scant regard for the model provided by the Editio Typica of the Liturgia Horarum. These volumes betray no understanding or experience of the exigencies of choral prayer.
What Were They Thinking?
The editors had no idea, for example, that the function of antiphons is to launch and repose the psalmody, both musically — being in function of the mode of the psalm tone — and theologically, by providing a hermeneutical key to the psalm in a given liturgical context. Stupidly, they placed the psalm prayer after the doxology and before the repetition of the antiphon, thus annihilating one of the antiphon’s principal functions and fracturing the natural flow of the ending of the doxology into the antiphon. Is it really possible that no one in the employ of the American bishops noticed this in 1975?

And the Hymns
The most egregious deficiency of the American edition however, is, with precious few exceptions, the arbitrary replacement of the Church’s official hymnody with a potpourri of compositions never intended for the Divine Office. This is a problem that John Mason Neale addressed in an article published in 1849:
Hymns of the Western Church

Among the most pressing of the inconveniences consequent on the adoption of the vernacular language in the office-books of the Reformation, must be reckoned the immediate disuse of all the hymns of the Western Church. That treasury, into which the saints of every age and country had poured their contributions, delighting, each in his generation, to express their hopes and fears, their joys and sorrows, in language which whould be the heritage of their Holy Mother until the end of time–those noble hymns, which had solaced anchorites on their mountains, monks in their cells, priests in bearing up against the burden and heat of the day, missionaries in girding themselves for martyrdom–henceforth became as a sealed book and as a dead letter.

Day Unto Day and Night Unto Night

The prayers and collects, the versicles and responses, of the earlier Church might, without any great loss of beauty, be preserved; but the hymns, whether of the sevenfold daily office, of the weekly commemoration of creation and redemption, of the yearly revolution of the Church’s seasons, or of the birthdays to glory of martyrs and confessors–those hymns by which day unto day had uttered speech, and night unto night had taught knowledge–could not, by the hands then employed in ecclesiastical matters, be rendered into another, and that a then comparatively barbarous, tongue.

Still Expecting in Patience the Rest

One attempt the Reformers made–the version of the Veni Creator Spiritus in the Ordinal; and that, so far perhaps fortunately, was the only one. . . . The Church of England had, then, to wait. She had, as it has well been said, to begin over again. There might arise saints within herself, who, one by one, should enrich her with hymns in her own language; there might arise poets, who should be capable of supplying her office-books with versions of the hymns of earlier times. In the meantime the psalms were her own; and grievous as was the loss she had sustained, she might be content to suffice herself with those, and expect in patience the rest.