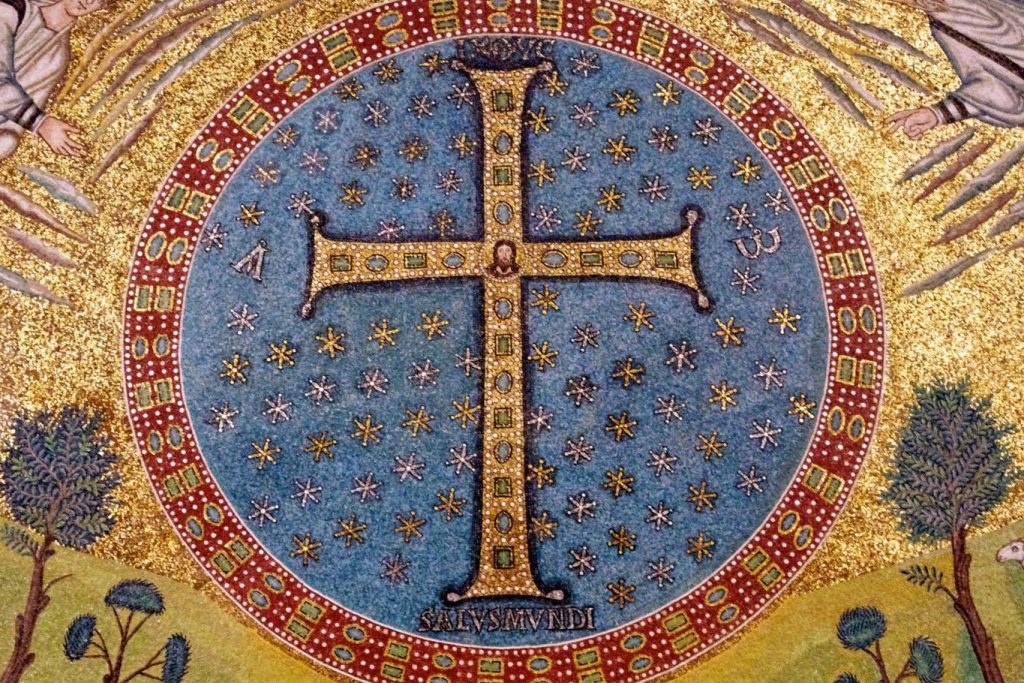 The image shows the mosaic in the apse of Sant’Appollinare in Classe in Ravenna with its glorious Crux Gemmata (bejeweled Cross), having at its centre, the adorable Face of Christ.

The Passion and Cross in Paschaltide
The oldest liturgical traditions in the Church contemplate, celebrate, and adore the life-giving Cross of Our Lord Jesus Christ in Paschaltide. Some benighted souls object to recalling the mysteries of the Passion and Cross after Pascha. Such an opinion betrays little knowledge of the Church’s living and abiding tradition in this regard.

And I beheld, and I heard the voice of many angels round about the throne, and the living creatures, and the ancients; and the number of them was thousands of thousands, Saying with a loud voice: The Lamb that was slain is worthy to receive power, and divinity, and wisdom, and strength, and honour, and glory, and benediction. And every creature, which is in heaven, and on the earth, and under the earth, and such as are in the sea, and all that are in them: I heard all saying: To him that sitteth on the throne, and to the Lamb, benediction, and honour, and glory, and power, for ever and ever. (Apocalypse 5:11-13).

By His Holy and Glorious Wounds
At the very beginning of the Great Paschal Vigil, as grains of incense are being inserted into the Paschal Candle, this prayer evokes the Five Wounds of Christ: By His holy and glorious wounds, may Christ the Lord guard and protect us. This liturgical formula is a fitting invocation at all times, but in Paschaltide it holds a particular resonance. The contemplation of the Wounds of Christ began with His apparitions to the Apostles after the Resurrection. The origin and impetus thus given to devotion to the Five Wounds is essentially biblical and liturgical.

Family Prayer
It would be fitting, during Paschaltide, to close family prayers with the above-mentioned liturgical formula. Children might be invited to learn the prayer by heart and recite it after kissing the five wounds of Our Lord depicted on the crucifix or in an icon of the Risen Saviour.

Commemoration of the Cross
In our Benedictine Antiphonal (1934 edition, Solesmes) there is a commemoration of the Holy Cross at Lauds and Vespers during Paschaltide. This liturgical practice keeps the mystery of the Cross present to the eyes, the ears, and the heart. The liturgy of Paschaltide does not obliterate the Church’s focus on the Passion and Cross; it transforms it.

At Lauds:
Antiphon: The Crucified is risen from the dead, and hath redeemed us, alleluia.

At Vespers:
Antiphon: He who suffered the Holy Cross and shattered hell, rose on the third day, robed in power, alleluia.

At both Hours:
V. Tell ye among the nations, alleluia.
R. That the Lord hath reigned from the tree, alleluia.

Let us pray.
O GOD, who for our sake
didst will Thy Son to undergo the torments of the Cross,
that Thou mightest drive far from us the power of the enemy;
grant unto us Thy servants
that we may attain to the grace of His Resurrection.
Through the same Christ our Lord.
Amen.

The feast commemorates Saint Helena’s finding of the Cross in Jerusalem, and the signs and wonders that accompanied it and verified its authenticity. Saint Helena, the mother of the Emperor Constantine, carried part of the Cross back to Rome, where it was enshrined in the Basilica of Santa Croce in Gerusalemme, on the site of the Sessorian palace.

The entire Mass and Office of the Finding of the Holy Cross deserve to be meditated and held in the heart. The liturgical texts of the feast demonstrate and support that, far from being inappropriate during Paschaltide, the contemplation and celebration of the mysteries of the Lord’s Passion and Cross emerge, in the light of these fifty days of jubilation, as an inexhaustible wellspring of healing and of hope.

With joy we keep the feast
of the Finding of the Cross,
whose light shineth over all the world, alleluia.
(Antiphon at Matins)

In Personal Devotion
Blessed Abbot Columba Marmion, whose knowledge and love of Sacred Scripture and of the Church’s liturgy transformed the piety of generations of priests and layfolk in the last century, made the Way of the Cross every day of his life, including all through Paschaltide. While some would object that the Way of the Cross has no place in a “Resurrection Spirituality”, Blessed Marmion and countless other saints demonstrate that there is, in fact, no better time during which to return to the loving consideration of the Passion of the Lord than Paschaltide, for it is only in the light of the Paschal Candle that one can begin to read rightly the Verbum Crucis, the Word of the Cross.

There are other Passion-centred practices of devotion that harmonize fully with the liturgy of Paschaltide. Among them are the Chaplet of Divine Mercy made known by Saint Faustina Maria Kowalska, the Chaplet of the Five Wounds prayed by Sister Marie-Marthe Chambon, and devotions to the Precious Blood, the Holy Face, and the Sacred Heart.

A personal piety that is directed and nourished by the Sacred Liturgy will never become unbalanced or bizarre. The liturgy of Mother Church is broader and deeper than some proponents of a shortsighted and shallow “liturgical fundamentalism” would want us to believe.

Christ, the Crucified King,
O come, let us adore, alleluia.
(Invitatory at Matins of the Finding of the Holy Cross, 3 May)