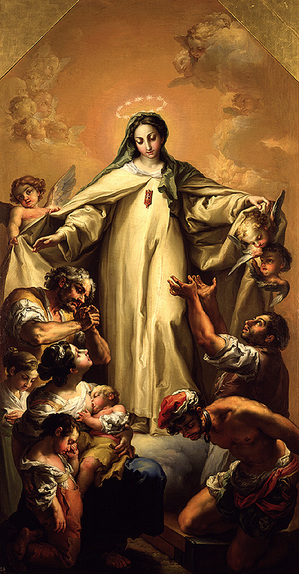 Marian Orders and Institutes
Our Blessed Lady is at the origin of any number of Orders, religious institutes, and monasteries. Very often she appeared, entrusting a founder or foundress with a particular mission, with a rule of life to foster that mission and, sometimes, with a distinctive habit. Among the many institutes established by an inspiration from the Mother of God, and with her help, are the Order of the Blessed Virgin Mary of Mount Carmel; the Cistercians who, in the middle ages, were called the Monks of Mary; the Olivetan Benedictines; the Bridgettines; the Servites; and the Order of Our Lady of Ransom or Mercedarians. The latter keep today as their patronal feast.

Saint Peter Nolasco and the Mercedarians
It is related that, in the early thirteenth century while much of Spain lay under the domination of the Saracens, the Blessed Virgin Mary appeared to Peter Nolasco, encouraging him to found an Order for the purpose of redeeming Christians held in brutal slavery by the infidels. The brethren of the new Order, in addition to the three vows of religion taken by other mendicants, bound themselves by a fourth vow to give themselves in pawn to the infidels, if necessary, to obtain the liberation of Christians from slavery.

In addition to the practice of the spiritual and corporal works of mercy, Mother McCauley’s Sisters of Mercy chanted the Little Office of the Blessed Virgin Mary in choir and, on solemn occasions, donned the ample white cloak associated with the Order of Carmel, as sign of their devotion to Our Lady and of the Institute’s spiritual affiliation with the Carmelite Fathers of Saint Teresa’s Church in Dublin. The prior of the Carmelites in Clarendon Street was, in effect, the ecclesiastical superior of Mother McCauley’s Convent of Mercy. The Religious Sisters of Mercy also keep September 24th as their patronal feast.
The Collect for today’s feast is an effective prayer for deliverance from bondage to sin:

O God, who for the deliverance of Christians
from the power of the heathen,
wast pleased through the most glorious Mother of Thy Son
to enrich Thy Church with a new family,
we pray Thee grant that we,
who devoutly venerate her as the foundress of this great work,
may likewise be delivered by her merits and intercession
from all our sins and from bondage to the power of hell.