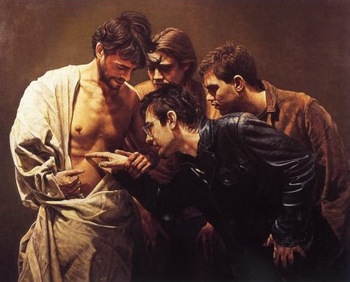 Where deep the spear had pierced,
there Thomas searched thy side,
Whence for the nations’ health,
poured forth the healing tide;
By this and each blest wound
thy glorious Body bears,
We suppliants thee entreat,
regard our contrite prayers.
I intended to post something for the beginning of the Pauline Year, but didn’t get to it, and now I’ve just finished singing Vespers of Saint Thomas! I will get to the Pauline Year, that I promise, but for the moment I want to share the splendid antiphons given in Volume III of the Liber Antiphonarius (2007).
The feast of Saint Thomas surprises us at the beginning of July with the delights of Paschaltide. (It reminds me of the petites madeleines of Marcel Proust. One begins to sing the liturgy of Saint Thomas and, straightaway, the palate of the soul tastes anew something of the Second Sunday of Easter. )
Each of the six proper antiphons runs with alleluias like liquid diamonds.
Benedictus
At the Benedictus (John 20, 29), it is Our Lord Himself who speaks:
Quia vidisti me, Thoma, credidisti;
beati qui non viderunt et crediderunt, alleluia.
Thou hast learned to believe, Thomas, because thou hast seen me.
Blessed are those who have not seen, and yet have learned to believe, alleluia.
In the last incise the tonic accent (credidérunt) falls on la; it is literally a note of triumph, the triumph of faith over seeing.
Tierce
The antiphon at Tierce (Luke 24, 36) again evokes the presence of the Risen Lord in the midst of His own:
Stetit Iesus in medio discipulorum suorum.
et dixit eis: Pax vobis, alleluia, alleluia.
Jesus stood in the midst of his disciples,
and said, Peace be upon you, alleluia, alleluia.
The chant of the Church is possessed of a certain sacramental quality. When one sings it with one’s voice attuned to one’s mind and heart, it is a channel of grace. The sanctifying power of the Word of God is released as that Word is sung in the assembly of the faithful. Here one is not singing about an event that happened two-thousand years ago in a locked room in Jerusalem: the liturgy brings the historical “there and then” into the sacramental “here and now.” Our Lord is present to His Church now. He stands in the midst of His disciples in the liturgical hodie, and says, Peace be upon you. The response of the Church is the double alleluia that resolves the antiphon.
Sext
At Sext the antiphon (John 20, 24, 25) interprets the witness of the other disciples to Thomas:
Thomas, qui dicitur Didymus, non erat cum eis quando venit Iesus;
dixerunt alii discipuli: Vidimus Dominum, alleluia.
Thomas, who is also called Didymus, was not with them when Jesus came.
The other disciples told him, We have seen the Lord, alleluia.
Vidimus Dominum begins on a si bémol and cascades down to do, before coming to rest on the final alleluia. There is wonder and amazement in the last incise of the antiphon: it is the whole Church’s confession of faith: We have seen the Lord, alleluia.
None
The antiphon at None (John 20, 27) is textually the same as the glorious Communion Antiphon for the Second Sunday of Easter, but the melody is different.
Mitte manum tuam et cognosce loca clavorum, alleluia;
et noli esse incredulus, sed fidelis, alleluia.
Put forth thy hand and know the place of the nails, alleluia;
Cease thy doubting and, believe, alleluia.
Again, it is Our Lord who speaks, inviting Thomas to the “knowledge” of His glorious wounds, wellsprings of peace for souls troubled by doubt. The second half of the antiphon is a command; it causes the very thing it enjoins. One who receives the Word of the Lord humbly, receives, at the same time, all its inward effect.
Magnificat
Finally, at the Magnificat, Thomas himself — the Thomas in each of us — sings the antiphon (John 20, 25.28).
Misi digitum meum in fixuram clavorum et manum meam in latus eius et dixi:
Dominus meus et Deus meus, alleluia.
I put my finger in the print of the nails and my hand into his side and said:
My Lord and my God, alleluia.
When I was last in Ireland a friend related how, when he was a small boy hearing Mass with his father, at the elevation of the Sacred Host a great groan of faith would go up from all the menfolk as they thumped their breasts, saying, “My Lord and my God.” In singing this antiphon tonight, something in me made it leap toward the Most Holy Eucharist. Faith does more than believe; a lively faith adores.
Painting: John Granville Gregory, ca. 1990.