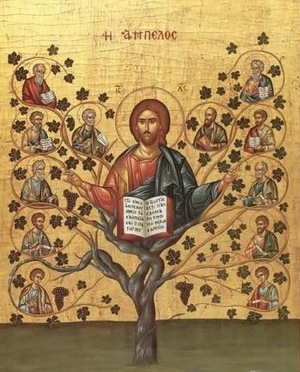 John 15:9-17
Go and Bear Fruit
In the Roman Missal the Mass for the feast of Saint Matthias the Apostle begins, not with an antiphon drawn from the Psalms as it usually does, but with a word of Our Lord: “You did not choose Me, says the Lord, but I chose you and appointed you that you should go and bear fruit and that your fruit should abide” (Jn 15: 16). The same word is given us again in the Gospel. How extraordinary that while we are yet on the threshold of the Holy Sacrifice, Jesus should address a word — and such a word — to us. Before we had a chance to open our mouths, He spoke to us. He revealed to us the choice of His love and His desire, even more, His design that we should bear fruit, fruit that will abide.
The Gospel of Life
A Christian cannot be barren. “My Father is the vinedresser. Every branch of mine that bears no fruit, He takes away” (Jn 15:2). Spiritual sterility is incompatible with the choice of God. God wants us fruitful; he wants us to be bearers of life, givers of life, witnesses to the life that courses from the True Vine into every branch and tendril.
The Contraceptive Mentality
Just as there can be in the natural order a “contraceptive mentality” that thwarts and inhibits the transmission of the gift of life, so too there can be in the supernatural order a “contraceptive mentality” that thwarts and inhibits the transmission of the life of grace. There is such a thing as “sterilization” of the soul — a reversible state because of God’s ever-ready mercy — but a frightening reality nonetheless.
Spiritual Fecundity
Spiritual fecundity is not always visible. The children of our prayers and tears may remain unknown to us in this life but we will see their faces in heaven. Our part here below is to accept the responsibilities of spiritual fatherhood and motherhood. “You did not choose me, but I chose you” (Jn 15:16).
Families of Souls
Parents consecrated in marriage have a spiritual fatherhood and motherhood of the children they have brought into the word; it is not enough to provide housing, food, drink, clothing, healthcare, education, security, and affection. There is something more. The married couple is called to spiritual fecundity and this long after the passing of the natural seasons of bearing and raising children, right into eternity. Spiritual parenting is a coordinate of the baptismal priesthood in the state of married life. Father and Mother are sweet names in the mouths of a couple’s children; they are made sweeter by the Holy Spirit who reveals their meaning in the family of souls.
The Johannine Fatherhood of the Priest
The priest is called to fatherhood; he refuses this fatherhood or minimizes it at the peril of his own soul because it was for this priestly fruitfulness that he was chosen by Christ. The priest is called to cherish the Mystical Body of Christ and to nourish it, to play an indispensable role in the transmission of divine life. Spiritual fatherhood is actualized sacramentally in preaching, in hearing confessions, and in the celebration of the other sacraments, above all in offering the Holy Sacrifice of the Mass. There is also a hidden aspect to the fatherhood of the priest: suffering and the secret prayer that pleads the Blood of Christ over every sorrow and every wound opened by sin. The fatherhood of the priest — his Johannine fatherhood — grows out of his contemplation of the pierced Heart of the Crucified. It is the wound from which flows life, “life in abundance” cf. Jn 10:10).
The Marian Motherhood of the Consecrated Woman
The consecrated woman, be she in a monastery or in an apostolic congregation, is called to spiritual fecundity, to the joys and sorrows of a real motherhood of souls. Just as the fatherhood of the priest is Johannine,the motherhood of the consecrated woman is Marian. The sister who hesitates before the motherhood to which Christ calls her or who, at some level, resists growing into it, is spiritually contracepting. She risks becoming the barren wife so often lamented in Scripture. The sister who says “Yes” to the fecundity willed for her by Christ enters deeply into the mystery of Mary and of the Church. The fruitfulness of spiritual motherhood is rarely visible, obliging the consecrated woman to live an intense faith, an austere hope and, at times, a crucifying love. The reality is that on the other side of eternity every sister made fruitful in Christ will be called Mother and, appearing before the face of God will be able to say, “Here am I, and the children God has given me” (Heb 2:13).
And Friends of Christ
The vocation to the fatherhood and motherhood of souls is daunting. It would be altogether frightening except for one thing. He who said, “I appointed you that you should go and bear fruit” (Jn 15:16) also says today, “I have called you friends” (Jn 15:15). The Most Holy Eucharist is the sign of that friendship and the source of all fecundity. And the Church is in every age “a fruitful vine” with her children “like olive plants around her table” (cf. Ps 127:3).