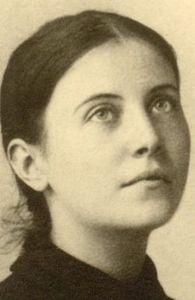 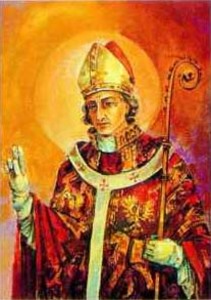 Third Friday of Paschaltide
Memorial of Saint Stanislaus, Bishop and Martyr
Acts 9:1-20
John 6:52-59
Saint Stanislaus
We celebrate today the feast of Saint Stanislaus, patron of Poland. Like the young Karol Wojtyla, his successor as Bishop of Krakow, Stanislaus wished to embrace monastic life. Divine Providence, however, disposed otherwise. Stanislaus was appointed a canon of the cathedral of Krakow, and later, in 1071, named bishop of the same see by Duke Boleslaus. It was Boleslaus, become King of Poland, who with his own hand murdered Bishop Stanislaus on May 8, 1079, as he was celebrating Holy Mass.
Stanislaus had publicly reproved Boleslaus for his evil life and, as a last resort, excommunicated him. Boleslaus, instead of humbling himself and repenting of his sins, became enraged. One of the surest signs of the capital sin of pride is the inability to accept correction. Pride gives birth to rage. Rage either simmers below the surface, poisoning the soul, or expresses itself in violence. Had Boleslaus imitated the repentance of King David, he might have become a saint. Instead, he grew hard in his pride, and to his other sins added murder.
Saint Gemma
Today is also the dies natalis of Saint Gemma Galgani. When she was twenty years old, Gemma developed meningitis. Mystically befriended by the young Passionist Saint Gabriel of the Mother of Sorrows, Gemma was miraculously cured through his intercession. Sufferings, both physical and emotional, refined Gemma’s soul until her configuration to Jesus Crucified was confirmed by the wounds she bore in her flesh. Gemma died at the age of twenty-five on April 11, 1903. She was beatified in 1933, and canonized in 1940. Like Saint Gabriel, her spiritual brother, Saint Gemma is a powerful intercessor for young people. In Rome, I would sometimes go to pray at the altar dedicated to her in the Basilica of Saints John and Paul.
The Altar
What did the tenth century Saint Stanislaus and the twentieth century Saint Gemma have in common? They ate the Flesh of the Son of Man and drank His Blood. They anticipated the life of heaven by living on earth a life of Eucharistic grace. Saint Stanislaus died at the altar, perfectly identified with Jesus, Victim and Priest. Saint Gemma, worn out by sufferings, died on the altar of her bed, identified in her own way with Jesus, Victim and Priest.

Victim and Priest
Both saints took to heart the words of Our Lord in today’s Gospel: “He who eats my Flesh and drinks my Blood, lives continually in me, and I in him (Jn 6:57). There you have it. That is holiness. To live continually in Christ, allowing Him to live out all His mysteries in us, including the one that sums them all up: that of His Victimal Priesthood consummated on the altar of the Cross. I am reminded today of the words that Suzanne Wrotnowksa (Mother Marie des Douleurs) prayed in the crypt of the basilica of Montmartre on the morning of April 11, 1930:
Behold, we are Yours;
make us whatever You will.
We ask to be little hosts
immolated on the altar of Your Heart.
We have only one desire:
it burns intensely,
and You have put it in our souls:
we want our lives to be but a moment of Your Passion.
We do not want to die
without having fulfilled in our flesh
what is lacking to Your sufferings
for the sake of Your Body which is the Church.
We are happy to surrender ourselves entirely to You
by this consecration;
we renounce once and for all the right to dispose of ourselves.
O Divine Master,
we place our life in Your hands with an immense confidence,
becoming, as it were, strangers to ourselves.
Make use of us as You please.
In the fire of Your infinite love consume us.
Take us, like little hosts, into Yourself forever . . . .