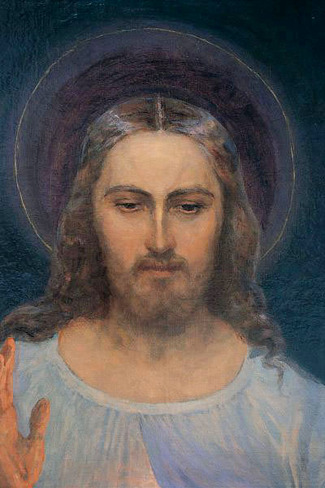 Pope Benedict XVI Calls the Face of Christ the Supreme Revelation of the Mercy of God
The Holy Father’s message at the Regina Caeli today, presents the Vultus Christi, the Face of Christ, as the Face of Mercy. Here is my translation of the Italian text:
Dear brothers and sisters,
During the Jubilee of the Year 2000, the beloved Servant of God John Paul II established that in the whole Church the Sunday After Easter, besides being the Sunday In Albis, should also be named the Sunday of Divine Mercy. This he did in concomitance with the canonization of Faustina Kowalska, the humble Polish Sister, and zealous messenger of the Merciful Jesus, who was born in 1905 and died in 1938.
Mercy is, in reality, the central nucleus of the Gospel message, and the very name of God, the face with which He revealed Himself in the Old Covenant, and fully in Jesus Christ, the incarnation of creating and redeeming Love. This merciful love also illumines the face of the Church, and manifests itself by means of the sacraments, in particular that of Reconciliation, and also by the works of charity, both communitarian and individual.
All that the Church says and does manifests the mercy that God nurtures for man. When the Church must recall a truth that is misunderstood, or a good that has been betrayed, she is compelled to do so by merciful love, so that men may have life, and have it in abundance (cf. Jn 10:10). From Divine Mercy, which pacifies hearts, springs authentic peace in the world, peace among peoples, and among different cultures and religions.
Like Sister Faustina, John Paul II made himself, in his turn, the apostle of Divine Mercy. The evening of that unforgettable Saturday, April 2nd, 2005, when he closed his eyes upon this world, was really the vigil of the Second Sunday of Easter, and many notice the singular coincidence, that brought together in itself the Marian dimension — the First Saturday of the month — and the dimension of Divine Mercy.
In fact, his long and multiform pontificate has herein its central nucleus: all his mission in the service of the truth concerning God and man and peace in the world, is summed up in this proclamation, as he himself said it in Cracow in 2002, when he inaugurated the great Shrine of Divine Mercy. “Apart from the mercy of God, there is no other source of hope for human beings.”
His message then, like that of Saint Faustina, leads back to the Face of Christ, the supreme revelation of the Mercy of God. Constantly to contemplate that Face: this is the heritage which he left us, and which we, with joy, receive and make our own.
Pope Benedict XVI
Divine Mercy Sunday
March 30, 2008