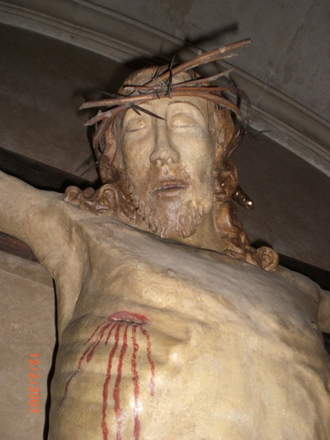 “They shall look on Him
whom they have pierced” (Jn 19:37)
Dear Brothers and Sisters!
“They shall look on Him whom they have pierced” (Jn 19:37). This is the biblical theme that this year guides our Lenten reflection. Lent is a favourable time to learn to stay with Mary and John, the beloved disciple, close to Him who on the Cross, consummated for all mankind the sacrifice of His life (cf. Jn 19:25). With a more fervent participation let us direct our gaze, therefore, in this time of penance and prayer, at Christ crucified who, dying on Calvary, revealed fully for us the love of God. In the Encyclical Deus caritas est, I dwelt upon this theme of love, highlighting its two fundamental forms: agape and eros.
God’s love: agape and eros
The term agape, which appears many times in the New Testament, indicates the self-giving love of one who looks exclusively for the good of the other. The word eros, on the other hand, denotes the love of one who desires to possess what he or she lacks and yearns for union with the beloved. The love with which God surrounds us is undoubtedly agape. Indeed, can man give to God some good that He does not already possess? All that the human creature is and has is divine gift. It is the creature then, who is in need of God in everything. But God’s love is also eros. 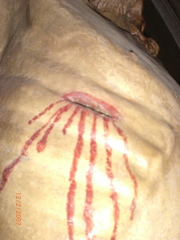 In the Old Testament, the Creator of the universe manifests toward the people whom He has chosen as His own a predilection that transcends every human motivation. The prophet Hosea expresses this divine passion with daring images such as the love of a man for an adulterous woman (cf. 3:1-3). For his part, Ezekiel, speaking of God’s relationship with the people of Israel, is not afraid to use strong and passionate language (cf. 16:1-22).
These biblical texts indicate that eros is part of God’s very heart: the Almighty awaits the “yes” of His creatures as a young bridegroom that of his bride. Unfortunately, from its very origins, mankind, seduced by the lies of the Evil One, rejected God’s love in the illusion of a self-sufficiency that is impossible (cf. Gn 3:1-7). Turning in on himself, Adam withdrew from that source of life who is God Himself, and became the first of “those who through fear of death were subject to lifelong bondage” (Heb 2:15). God, however, did not give up. On the contrary, man’s “no” was the decisive impulse that moved Him to manifest His love in all of its redeeming strength.

The Cross reveals the fullness of God’s love
It is in the mystery of the Cross that the overwhelming power of the heavenly Father’s mercy is revealed in all of its fullness. In order to win back the love of His creature, He accepted to pay a very high price: the blood of His only begotten Son. Death, which for the first Adam was an extreme sign of loneliness and powerlessness, was thus transformed in the supreme act of love and freedom of the new Adam. One could very well assert, therefore, together with Saint Maximus the Confessor, that Christ “died, if one could say so, divinely, because He died freely” (Ambigua, 91, 1956). On the Cross, God’s eros for us is made manifest. Eros is indeed – as Pseudo-Dionysius expresses it – that force “that does not allow the lover to remain in himself but moves him to become one with the beloved” (De divinis nominibus, IV, 13: PG 3, 712). Is there more “mad eros” (N. Cabasilas, Vita in Cristo, 648) than that which led the Son of God to make Himself one with us even to the point of suffering as His own the consequences of our offences?
“Him whom they have pierced” 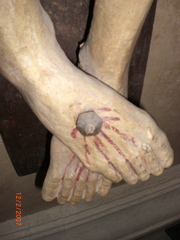 Dear brothers and sisters, let us look at Christ pierced in the Cross! He is the unsurpassing revelation of God’s love, a love in which eros and agape, far from being opposed, enlighten each other. On the Cross, it is God Himself who begs the love of His creature: He is thirsty for the love of every one of us. The Apostle Thomas recognized Jesus as “Lord and God” when he put his hand into the wound of His side. Not surprisingly, many of the saints found in the Heart of Jesus the deepest expression of this mystery of love. One could rightly say that the revelation of God’s eros toward man is, in reality, the supreme expression of His agape. In all truth, only the love that unites the free gift of oneself with the impassioned desire for reciprocity instills a joy, which eases the heaviest of burdens. Jesus said: “When I am lifted up from the earth, I will draw all men to myself” (Jn 12:32). The response the Lord ardently desires of us is above all that we welcome His love and allow ourselves to be drawn to Him. Accepting His love, however, is not enough. We need to respond to such love and devote ourselves to communicating it to others. Christ “draws me to Himself” in order to unite Himself to me, so that I learn to love the brothers with His own love.
Blood and water
“They shall look on Him whom they have pierced.” Let us look with trust at the pierced side of Jesus from which flow “blood and water” (Jn 19:34)! The Fathers of the Church considered these elements as symbols of the sacraments of Baptism and the Eucharist. Through the water of Baptism, thanks to the action of the Holy Spirit, we are given access to the intimacy of Trinitarian love. In the Lenten journey, memorial of our Baptism, we are exhorted to come out of ourselves in order to open ourselves, in trustful abandonment, to the merciful embrace of the Father (cf. Saint John Chrysostom, Catecheses, 3,14ff). Blood, symbol of the love of the Good Shepherd, flows into us especially in the Eucharistic mystery: “The Eucharist draws us into Jesus’ act of self-oblation … we enter into the very dynamic of His self-giving” (Encyclical Deus caritas est, 13).
Let us live Lent then, as a “Eucharistic” time in which, welcoming the love of Jesus, we learn to spread it around us with every word and deed. Contemplating “Him whom they have pierced” moves us in this way to open our hearts to others, recognizing the wounds inflicted upon the dignity of the human person; it moves us, in particular, to fight every form of contempt for life and human exploitation and to alleviate the tragedies of loneliness and abandonment of so many people. May Lent be for every Christian a renewed experience of God’s love given to us in Christ, a love that each day we, in turn, must “regive” to our neighbour, especially to the one who suffers most and is in need. Only in this way will we be able to participate fully in the joy of Easter. May Mary, Mother of Beautiful Love, guide us in this Lenten journey, a journey of authentic conversion to the love of Christ. I wish you, dear brothers and sisters, a fruitful Lenten journey, imparting with affection to all of you, a special Apostolic Blessing.
From the Vatican, 21 November 2006.
BENEDICTUS PP. XVI
The photographs are of the wonderfully expressive medieval crucifix in the Basilica of Santa Croce in Gerusalemme. I took them today to illustrate the Holy Father’s letter.