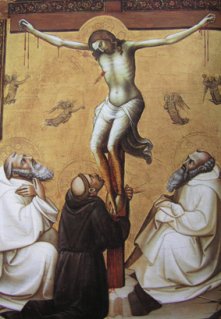 The Open Side of Jesus Crucified
Look at this remarkable painting of Jesus Crucified. The focus of the composition is the wound in His Sacred Side. An angel holding a chalice is hovering just beneath it to receive the outpouring of His Blood. There are also angels stationed beneath His wounded hands. A fourth angel stricken with astonishment and grief looks on.
Saint Francis of Assisi
At the foot of the Cross, close to the wounded feet of Jesus, kneels Saint Francis of Assisi, embracing the saving wood. Saint Francis is closest to the feet of Jesus because he was called to walk in lowliness, poverty, and humility, in imitation of the Son of Man who “had no where to lay His head” (Mt 8:20).
Saint Benedict
On the left is Saint Benedict with his hands crossed over his breast. This is the ritual gesture of the monk when, on the day of his profession, he sings the second part of the Suscipe me, Domine: “Let me not be confounded in my expectation” (Ps 118:116). Saint Benedict is gazing at the Face of the Crucified with an extraordinary intensity of compassion and love. One could draw a direct line from the Face of Jesus to the face of Saint Benedict. This is what he means when he says in his Rule that one desiring to become a monk must “truly seek God” (RB 58:7).
Saint Romuald
On the right one sees Saint Romuald, whose feast we celebrate today. He is seated — rather like Mary of Bethany in Luke 10:39 — with his hands hidden in the sleeves of his cowl. These are subtle allusions to the hidden life in which Saint Romuald sought the Heart of Jesus, not by much doing (the hidden hands) but, rather, in much listening (the “Marian” posture). You will notice that Saint Romuald is not looking at the Face of the Crucified; he is focused on the wound in Jesus’ Sacred Side. Therein he seeks to hide himself like the dove in the cleft of the rock.