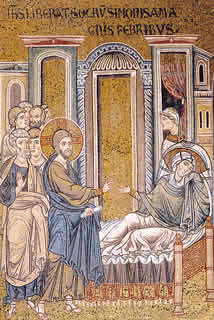 Wednesday of the 1st Week of the Year II
1 Samuel 3: 1-10, 19-20
Psalm 39: 2 and 5, 7-8a, 8b-9, 10 (R. 8a and 9a)
Mark 1:29-39
Hastening to the Cross
Saint Mark’s Gospel is a series of flashes in quick succession. Saint Mark writes in the style of a news broadcast: one image follows quickly upon another. Each image leaves, nonetheless, a vivid impression on the mind. One of Saint Mark’s favourite expressions is “forthwith,” or “immediately.” Reading Saint Mark’s Gospel just as it is written — and it can be read easily in less than an hour — can leave one breathless. In a sense, from the very first page of his Gospel, Saint Mark depicts Our Lord hastening to the Cross. Everything in the Gospel of Saint Mark is ordered to the mystery of the Cross.
Hospitality
Today’s Gospel contains four episodes. No sooner does Jesus leave the synagogue in Capernaum than we see Him entering the house of Simon and Andrew. “And immediately going out of the synagogue they came into the house of Simon and Andrew, with James and John. And Simon’s wife’s mother lay in a fit of a fever: and forthwith they tell Him of her” (Mk 1:29-30). Our Lord lifts her up by the hand — a kind of resurrection — and she goes straight from the sick bed to the kitchen to wait on her son-in-law’s Divine Guest and his disciples. Hospitality.
Healing and Deliverance
Change of scene. The sun has set. There is a crowd at the door. Saint Mark says that, “all the city was gathered together at the door” (Mk 1:33). Just imagine the noise, the anticipation, the pleading. Jesus then heals the sick and casts out many devils. Healing and deliverance.
Contemplation
Change of scene again. A very dramatic one. Saint Mark passes from all the city being gathered at the door of Simon’s house to a setting of solitude in the pre-dawn darkness. “And rising very early, going out, He went into a desert place: and there He prayed” (Mk 1:35). We see Our Lord in prayer. Most of us, I think, would want to linger here with Jesus in this desert place. We would want to hear Him in conversation with His Father and gaze upon His Holy Face. Contemplation.

Mission
Again Saint Mark changes the scene. Peter shows up. He sounds agitated, almost annoyed with his Master. “All seek for thee” (Mk 1:37). Our Lord, without hesitation, sets out for the neighbouring towns to preach, saying, “for to this purpose am I come” (Mk 1:38). That last phrase is very telling. It is Saint Mark’s way of saying what Saint John says throughout the Fourth Gospel: that Jesus came out from the Father. “I came forth from the Father, and am come into the world: again I leave the world, and I go to the Father” (Jn 16:28). Mission.
Christ in His Mysteries
In review, today’s brief Gospel gives us four different episodes or mysteries: hospitality, healing and deliverance, contemplation, and mission. Each of these contains and communicates a particular grace. Return to the mystery that speaks to your heart and linger there, according to the particular attraction that you have received. “There are diversities of graces, but the same Spirit; and there are diversities of ministries, but the same Lord” (1 Cor 12:4).
Into the Holy Sacrifice
The liturgical proclamation of the Gospel sends us to the altar where the Sacrifice of the Cross is made present. The whole work of Christ is ordered to the Cross, and the Cross is made present, here and now, in the Holy Sacrifice of the Mass. The Mass sums up the four episodes of today’s Gospel and communicates the grace that each contains. It is in the Mass that we hear the call to place ourselves at the service of the Divine Hospitality. It is in the Mass that we receive healing and deliverance from evil. It is in the Mass that we enter the intimacy of Our Lord’s prayer to the Father. It is from the Mass that we are sent forth to carry the Kingdom of God into all of life. This explains, I think, why Mother Marie des Douleurs wrote in 1933: “Entirely forgetting themselves, priests must no longer live except to celebrate the Holy Sacrifice. Let them live, in some way, from one Mass to another.” The same principle applies to all who, benefiting from the ministry of the priest, enter, day after day, into the Mystery of the Cross renewed on the altar.