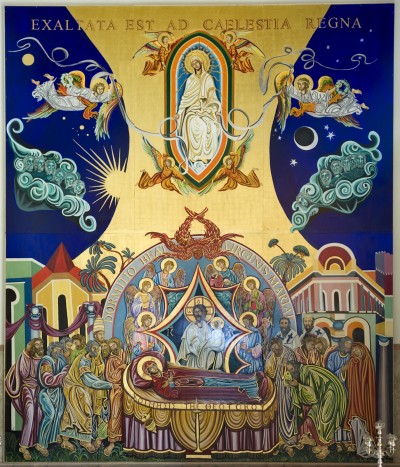 Feast of the Assumption of the Blessed Virgin Mary
From a Homily by St Modestus of Jerusalem, Bishop

When Mary had successfully completed her voyage through life, the human ship which had carried her God reached the haven of perfect peace beside the Helmsman of the world who, with her help, had saved the human race from the flood of godlessness and sin, and given it life.  He who gave one law on Sinai, and issued another from Sion, our God himself, sent there to have the ark which he had sanctified brought to him, the ark of which David her ancestor had sung: “Arise, O Lord, into thy resting place, thou and the ark which thou hast sanctified.”

This ark was not drawn by oxen like the Mosaic ark of old, but guided and guarded by a heavenly army of holy Angels.  It was not an ark made by hands and plated with gold, but a living ark created by God, wholly luminous with the radiance of the all-holy and life-giving Spirit who had visited her.  Within this ark there was no jar of manna, no tables of the covenant, but instead the Bestower of manna and of the promised blessings of eternity, the Lord of the new and old covenants, who from this ark came into the world as a child and freed those who believe in him from the curse of the law.

The ark did not have Aaron’s rod within and the glorious Cherubim above, but possessed the incomparably greater glory of being herself the rod of Jesse, and of being overshadowed by the Divine, the almighty power of the supremely exalted Father.  And instead of preceding the Hebrew people like the earlier ark, this ark followed God when he appeared on earth in the body received from her.  Blessed by Angels and men alike to the glory of him who exalts her above all creatures in heaven and on earth, her holy lips exclaimed: “My soul doth magnify the Lord, and my spirit hath rejoiced in God my Saviour.”

Responsory.  Blessed art thou, || O Virgin Mary, Mother of God, for thou hast believed the Lord: there hath been a performance in thee of those things that were told thee: behold, thou art exalted above choirs of Angels. * Intercede for us to the Lord.  V. Hail Mary, full of grace, the Lord is with thee. * Intercede … Glory be … Intercede …