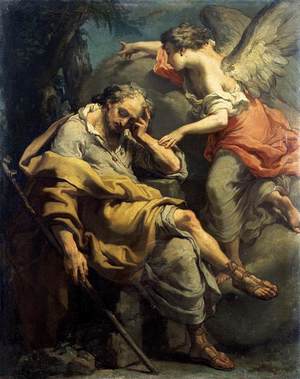 Mary and Joseph
Today’s Gospel presents the Virgin Mother through the eyes of Saint Matthew, who has a very particular interest in Saint Joseph. Mary is betrothed to Joseph; she is his promised bride and spouse. If ever a marriage was made in heaven, it was this one. God had, from all eternity, prepared this one man, Joseph, for this one woman, Mary.

The Virgin of the Sign
Then the unthinkable happened: Mary was found to be with child, not of Joseph, for they had not yet begun to live together, but of the Holy Spirit. What conflicts rose in Joseph’s heart? He could not doubt his Mary, nor could he deny that there was life in her virginal womb. The nearness of the Thrice-Holy God in Mary, the Virgin of the Sign, left him astonished and fearful. Recall the experience of the prophet Isaiah in the temple:

I said: Woe is me, because I have held my peace; because I am a man of unclean lips, and I dwell in the midst of a people that hath unclean lips, and I have seen with my eyes the King the Lord of hosts. And one of the seraphims flew to me, and in his hand was a live coal, which he had taken with the tongs off the altar. And he touched my mouth, and said: Behold this hath touched thy lips, and thy iniquities shall be taken away, and thy sin shall be cleansed. And I heard the voice of the Lord, saying: Whom shall I send? and who shall go for us? And I said: Lo, here am I, send me” (Is 6:1-8).

Depart From Me
Saint Joseph’s first impulse was to put a distance between himself and Mary, rather like Saint Peter who, after the miraculous draught of fish, said, “Depart from me, for I am a sinful man, O Lord. For he was wholly astonished” (Lk 5:8). The ark of the covenant, the tabernacle of the Most High, reasoned Joseph, belongs not in my house but, rather, in a hidden sanctuary where the miracle wrought by God will not be exposed to the disbelief and irreverent cynicism of men. Saint Joseph knew well the words of the Angel Raphael to Tobias and his father: “For it is good to hide the secret of a king: but honourable to reveal and confess the works of God” (Tb 12:7).

Holy Fear
Saint Matthew tells us that the very idea of cohabiting with Mary filled Joseph with fear. Whenever Saint Matthew uses the word “fear” in his Gospel, it means the sacred terror that every mortal feels in the presence of the power and paradox of a divine mystery. Saint Thomas Aquinas sums up this particular exegesis of the text when he says, “Joseph wished to give the Virgin her liberty, not because he suspected her of adultery, but because, respecting her holiness, he feared to live with her.”

Joseph Opens His Life to the Virgin With Child
We are told that Joseph had, in fact, resolved to put Mary away quietly. “But as he considered this, “behold, an Angel of the Lord appeared to him in a dream” (Mt 1:20). The Angel immediately addresses what lies like a heavy stone on Joseph’s heart: the fear of opening his house and his life to a miracle of God surpassing all understanding. “Joseph, son of David, do not fear to take Mary your wife, for that which is conceived in her is of the Holy Spirit” (Mt 1:20). The word of the Angel is a kind of exorcism of Joseph’ fear. It allows him to hear, and to receive, and to obey what will follow: the revelation of the Name of Jesus. Joseph understands that his home is to become the sanctuary of the Mystery of Jesus, and that he must be its guardian.

The Holy Name of Jesus
The Name of Jesus had already been revealed to Mary at the Annunciation but she, waiting upon God, had said nothing to Joseph. God reserved the revelation of the Name of Jesus to Joseph for this precise moment. Saint Bernard says, “Does one of us feel sad? Let the Name of Jesus come into his heart, from there let it spring to his mouth, so that shining like the dawn it may dispel all darkness and make a cloudless sky. Does someone fall into sin? Does his despair urge him to suicide? Let him but invoke this life-giving Name and his will to live will be at once renewed. . . . Where is the man who, tossed on the rolling seas of doubt did not quickly find certitude by recourse to the name of Jesus.” Saint Joseph was, I think, “tossed on the rolling seas of doubt” when the Name of Jesus was given him. And he quickly found certitude by recourse to the Name. When Joseph pronounced the Holy Name of Jesus for the first time, he found himself mysteriously and powerfully linked to the Child hidden in the womb of his Virgin Bride.

Emmanuel
The Angel went on to repeat Isaiah’s prophecy and to reveal that Jesus would be Emmanuel, God-with-us. “God-with-us,” thought Joseph, “God with Mary and with me.” In the strength of this realization, Joseph obeyed. “When Joseph woke from sleep, he did as the Angel of the Lord commanded him, and took his wife into his home” (Mt 1:24).

Mary Waits
In all of this, there are some priceless secrets of the interior life. The Word of God is uttered as the exorcism of our fears. The Name of Jesus is given us as light and food and medicine. “God-with-us” makes obedience possible. And one last thing: always Mary waits, silent, humble, and full of God. She waits for us to open to her. Where Mary enters, Christ enters. “Behold, I stand at the door and knock; if any one hears my voice and opens the door, I will come into him and eat with him, and he with me” (Rev 3:20). The remedy for so much of what we suffer, the remedy for the disarray and sterility that that we see even within the Church is the acceptance of the mystery of Mary, in imitation of Saint Joseph. One who refuses the mystery of Mary refuses God. One who refuses Mary refuses fruitfulness. One who thinks that Mary should, in some way, “be put away quietly,” distances himself from the plan of God and impedes its unfolding. One who refuses Mary grieves the Holy Spirit.

Saint Joseph and Saint John
Sacred Scripture gives us the example of two godly men who lived in the intimacy of the All-Holy Mother of God. The first of these is Saint Joseph. In accepting Mary on God’s terms, Joseph’s soul was flooded with grace; Joseph lived with Mary, the virgin full of grace. He dwelt in the presence of Mary, “the first tabernacle of history.” Mary was Joseph’s life, his sweetness, and his hope. Mary was for him the Mediatrix of All Graces. The more Saint Joseph experienced the mediation of Mary in his own life, the more did he treasure her, honour her, and love her.

Our Lady of Knock
When Our Lady appeared at Knock in Ireland on August 21st, 1879, she did so in the company of Saint Joseph and of Saint John. The Blessed Virgin was silent at Knock, but by appearing with Saint Joseph and Saint John, she was teaching us that the unfolding of God’s plan is dependent on our accepting her, on our taking her into our life.

In Mary’s Presence
If you would enter the mystery of Christmas or, what is even more, if you would have the mystery of Christmas enter you, then imitate Saint Joseph and Saint John. Take Mary, Virgin, Bride, and Mother, into your home. Give her the keys to every room in your house. She will enter in, bearing the Infant Christ beneath her Immaculate Heart. Decide, once and for all, to live every moment of your life in Mary’s presence. Do this and you will be blessed with the Christmas God wants you to have. That, really, is all that matters.