At the Monastery of the Glorious Cross, O.S.B., September 4, 5, and 6 will be marked by a triduum of Votive Masses in honour of the Holy Spirit. 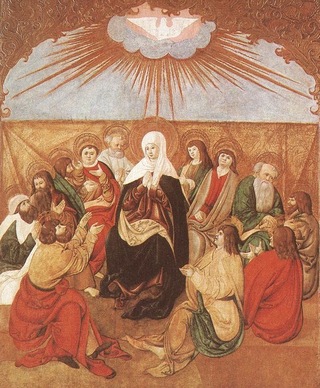 The triduum is being celebrated in supplication for the forthcoming General Chapter of the Congregation of the Benedictines of Jesus Crucified, which will be held in Brou-sur-Chantereine, France from September 19th until October 2nd.
1 Thessalonians 5:1-6, 9-11
Psalm 26: 1-4, 13-14
Luke 4:31-37
Come, Holy Spirit
We begin today a triduum of Votive Masses in honour of the Holy Spirit in supplication for the forthcoming General Chapter of the Congregation of the Benedictines of Jesus Crucified, which will be held in France from September 19th to October 2nd. In a certain sense, a General Chapter must have the same characteristics as the apostolic assembly that preceded the first Pentecost in the Cenacle. What exactly are these? From the description given us by Saint Luke in the Acts of the Apostles 1:13-14, we can learn quite a lot.
In the Light of the Eucharistic Face of Christ
The Blessed Virgin Mary and the Apostles went into retreat in the Cenacle immediately following the Ascension of the Lord from Mount Olivet. Each one carried in his heart the memory of that last glimpse of the Face of Jesus, and each one longed to see His Face again. In the time that stretches from the Ascension to the return of Our Lord in glory, His Face is turned toward us in the adorable mystery of the Eucharist. It is in the Eucharist that our gaze meets His. The Eucharist celebrated, adored, and contemplated must be at the heart of the General Chapter, just as it must be at the heart of our life from day to day.
Under the Leadership of Peter
The second characteristic is a reference to the unique mission of Peter in the Apostolic College. Saint Peter is named first in the list of those who went into the Cenacle. The successor of Saint Peter is the Pope, the bishop of Rome. If we consider the example of the saints through the ages, we see that the most accurate measure of one’s attachment to the Church, one, holy, catholic, and apostolic, is the degree of one’s attachment to the Holy Father. Saint Catherine of Siena referred to the Pope as her “sweet Christ on earth.”
Hans Urs von Balthasar warned prophetically of the critical danger of the “anti-Roman complex.” The core of the Protestant heresy was and remains the assertion of the individual’s perception of truth over the “Splendour of Truth” taught and defended by the Successor of Saint Peter and by the bishops in communion with him. The individual Protestant persists in saying, “I know, I choose, I prefer, and I believe,” over and above what Christ teaches and defines through the mouth of Peter. The Protestant body or sect does the same thing; it is a group of individuals who persist in saying, “We know, we choose, we prefer, and we believe,” over and against what Christ teaches and defines through the mouth of Peter.
When Blessed John XXIII convoked the Second Vatican Council, he composed a beautiful prayer to the Holy Spirit; in that prayer he affirmed that a second Pentecost could take place only “under the leadership of Peter.” We must be wary of a certain kind of creeping Protestantism that sets parts of the body against the whole; it causes certain members of the Body to resist the direction given by the Head. Positively, we must renew the vow of obedience in all its ecclesial implications. History demonstrates that religious institutes flourish in proportion to their attachment to the See of Peter; they decline in proportion to the degree to which they are infected with the “anti-Roman complex.”

With Confidence in Mary
The third characteristic of the apostolic assembly in the Cenacle is its attachment and attention to the Mother of Jesus, the Blessed Virgin Mary. During his long pontificate marked by extensive apostolic journeys, the Servant of God Pope John Paul II repeatedly made acts of consecration to the Blessed Virgin Mary. As a disciple of Saint Louis-Marie Grignion de Montfort from the time of his youth, Pope John Paul II understood that where Mary is welcomed, loved, and invoked, the Holy Spirit rushes in and pours out His gifts. If there is often little evidence of the action of the Holy Spirit in various religious assemblies, it is because so little attention is paid to the Holy Mother of God, the Aqueduct of the Water of Life, the Mediatrix of All Graces.
The divine plan of our salvation was able to unfold because Saint Joseph obeyed the word of the Angel: “Joseph, son of David, fear not to take unto thee Mary thy wife, for that which is conceived in her is of the Holy Ghost” (Mt 1:20). The divine plan of our salvation continued to unfold after the sacrifice of Calvary because Saint John obeyed the word of Jesus Crucified: “‘Behold thy mother.’ And from that hour, the disciple took her to his own” (Jn 19:27). The best preparation for any kind of ecclesial or monastic assembly is a deliberate and conscious act of consecration to the Blessed Virgin Mary.
Encouraging One Another
Saint Paul says to us today in the First Reading: “Go on then, encouraging one another and building up one another’s faith.” In presenting the three characteristics of the apostolic assembly in the Cenacle — Eucharistic, Petrine, and Marian — I have tried to do just that. We must beg the Holy Spirit over the next three days to suffuse us with these three graces of the first Pentecost so that we may go forward with eyes focused on the Eucharistic Face of Jesus, in submission to Peter, and with Mary.
Ten Rules for Community Living
If you read on to the very end of First Thessalonians in your lectio divina this morning, you will have discovered the ten rules for community living given us in preparation for the General Chapter. Here they are, as Saint Paul lays them out for us in 1 Thessalonians 5:12-22:
1. Pay deference to those who work among you, those who have charge of you in the Lord, and give you directions.
2. Make it a rule of charity to hold them in special esteem, in honour of the duty they perform, and maintain unity with them.
3. Warn the vagabonds, encourage the fainthearted.
4. Support the waverers, be patient towards all
5. See to it that nobody repays injury with injury.
6. Aim always at what is best, for one another and for all around you.
7. Joy be with you always.
8. Never cease praying.
9. Give thanks upon all occasions, this is what God expects of you in Christ Jesus.
10. Do not stifle the utterances of the Spirit, do not hold prophecy in low esteem; and yet you must scrutinize it all carefully, retaining only what is good, and rejecting all that has a look of evil about it.
Do these things then, with your gaze fixed on the Face of Jesus, in obedience to Peter, and with confidence in the Virgin Mary and “the God of peace will sanctify you wholly, keeping your spirit and soul and body unimpaired, to greet the coming of our Lord Jesus Christ without reproach” (Th 5:23-24).