Skip to content
HomeMost Holy Sacrament of the AltarWords of Father Ragheed, Priest and Martyr 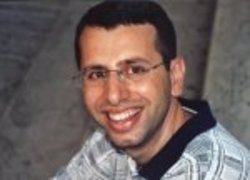 Father Ragheed Gannis, 34 years old, was killed by gunfire after having celebrating Holy Mass on Sunday in the Church of the Holy Spirit in Mosul, Iraq. Three subdeacons were killed with him. Hours later the bodies were still lying in the street because no one dared retrieve them. On May 28, 2005 Father Ragheed spoke at a prayer vigil during the Eucharistic Congress in Bari, Italy.
“Mosul Christians are not theologians; some are even illiterate. And yet inside of us for many generations one truth has become embedded: without the Sunday Eucharist we cannot live.”
“This is true today when evil has reached the point of destroying churches and killing Christians, something unheard of in Iraq till now.”
“On June 2004 of last year, a group of young women was cleaning the church to get it ready for Sunday service. My sister Raghad, who is 19, was among them.”
“As she was carrying a pale of water to wash the floor, two men drove up and threw a grenade that blew up just a few yards away from her.”
“She was wounded but miraculously survived. And on that Sunday we still celebrated the Eucharist. My shaken parents were also there.
“For me and my community, my sister’s wounds were a source of strength so that we, too, may bear our cross.”

“Last August in St Paul Church, a car bomb exploded after the 6 pm mass. The blast killed two Christians and wounded many others. But that, too, was another miracle—the car was full of bombs but only one exploded. Had they all gone off together the dead would have been in the hundreds since 400 faithful had come on that day.”
“People could not believe what had happened. The terrorists might think they can kill our bodies or our spirit by frightening us, but, on Sundays, churches are always full. They may try to take our life, but the Eucharist gives it back.”
“On December 7, the eve of the Immaculate Conception, a group of terrorist tried to destroy the Chaldean Bishop’s Residence, which is near Our Lady of the Tigris Shrine, a place venerated by both Christians and Muslims.”
“They placed explosives everywhere and a few minutes later blew the place up. This and fundamentalist violence against young Christians have forced many families to flee. Yet the Churches have remained open and people continue to go to mass, even among the ruins”.
“It is among such difficulties that we understand the real value of Sunday, the day when we meet the Risen Christ, the day of our unity and love, of our [mutual] support and help.”
“There are days when I feel frail and full of fear. But when, holding the Eucharist, I say ‘Behold the Lamb of God Behold, who takes away the sin of the world’, I feel His strength in me. When I hold the Host in my hands, it is really He who is holding me and all of us, challenging the terrorists and keeping us united in His boundless love.”
“In normal times, everything is taken for granted and we forget the greatest gift that is made to us. Ironically, it is thanks to terrorist violence that we have truly learnt that it is the Eucharist, the Christ who died and risen, that gives us life. And this allows us to resist and hope.”