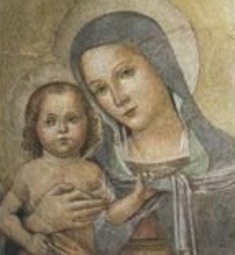 Father Abbot sent me to offer Holy Mass this morning in our lovely little chapel of La Madonna di Bon Aiuto (Our Lady of Good Help). There were about fifty faithful present. The chapel was built in 1476 by order of Pope Sixtus IV (1471–1484) into the ancient Roman Castrense amphitheatre that forms the wall surrounding the monastery gardens. The chapel enshrines an ancient fresco of the Blessed Virgin Mary.
At one time the image was in a kind of wayside shrine with no more than a roof to protect it.

A written account in the archives of our monastery relates that one day when Pope Sixtus IV was taking a walk from Saint John Lateran, he chanced upon a group of monks from Santa Croce and stopped to chat with them. All of a sudden a terrible thunderstorm with flashes of lightning came crashing down upon them. The little group sought refuge beneath the roof constructed over the image of the Madonna. The Pope invoked the bon aiuto (kindly help) and protection of the Mother of God. Following this incident, the Pope gave orders that the image be removed from the wayside shrine and that a chapel be built on the spot in honour of the Blessed Virgin under the title of Bon Aiuto.

The Benedictine–Cistercian Monks of Santa Croce in Gerusalemme were charged with the care of the chapel and were also given the adjoining prairies, which property they held until the invasion of the French in 1849. The 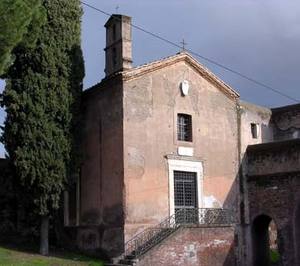 chapel remains a place of supplication to the Mother of God to the present day. It is opened during the month of May for daily Mass. The postulants and novices of Santa Croce also gather there daily during the month of May for the recitation of the Holy Rosary in common. The feast of the Madonna di Buon Aiuto is celebrated on the last Sunday of May with a Solemn Mass and a procession with the sacred image through the streets of the neighbourhood. There is a beautiful reproduction of the Madonna di Buon Aiuto in the Basilica of Santa Croce. People often linger before the image in prayer, light candles, and bring flowers to the Mother of God. Apart from the Rosary, the prayer most commonly associated with the image of the Madonna di Buon Aiuto is the Memorare, attributed to Saint Bernard of Clairvaux.