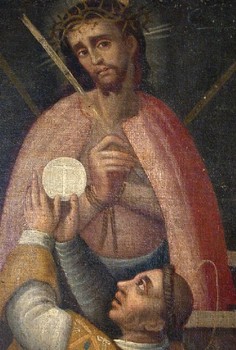 The “Oversight”
I was made aware today that in a certain monastery the Blessed Sacrament (enclosed in a pyx) was left unattended on a shelf near the tabernacle for two days. Just left there. Forgotten. Neglected. “An oversight,” they said. People came and went directly in front of the pyx. No one stopped. Priests and levites passed by and paid no attention. Finally, someone intervened and the situation was corrected. A few souls offered some hours of adoration in a spirit of reparation.
Loss of Faith
Would this have happened forty–five or fifty years ago? I think not. The loss of faith in the adorable mystery of the Eucharist, expressed in the way the Blessed Sacrament is now treated, or I should say mistreated, is directly related to the systematic dismantling of the Roman Liturgy and to the dismembering and mutilation of its rites that followed the Second Vatican Council.
Ritual Ruptures and Devotional Discontinuity
First communion rails were removed and tabernacles displaced. Then Holy Communion began to be given in the hand with the communicants standing. Then folks were instructed not to genuflect on two knees in the presence of the Blessed Sacrament exposed. Then, first in one diocese and then in another, the wonderfully fruitful Forty Hours Devotion was suppressed; so too was Nocturnal Adoration. Then, especially in Western Europe and North America, Extraordinary Ministers of Holy Communion — many of them poorly catechized and ill–prepared — began to invade the sanctuary — “to help priests,” we were told. (I thought the permament diaconate was restored for that very reason.)
The Adorable Body of Christ
Lex orandi, lex credendi, lex vivendi. As we worship, so do we believe, and as we believe, so do we live. Every authentic theology of the body derives from the theology of The Body of Christ and refers to it. Reverence for human life and for the human body is a consequence of reverence for the adorable Body of Christ. As we treat the Head sacramentally present in the weakness, vulnerability, and silence of the sacred species so will we find ourselves treating the weak, vulnerable, and silent (or silenced) members of His Mystical Body. It is all of a piece.
The Year of the Eucharist Sabotaged
The Servant of God Pope John Paul II attempted by means of his Year of the Eucharist to revive a sense of eucharistic amazement in the Church and to regenerate adoration, reverence, and holy awe. Admit it: the Year of the Eucharist was not a huge success; it met with indifference among many of the higher clergy. There were dioceses in which nothing was said or done in response to the Apostolic Letter, Mane, Nobiscum Domine. The Year of the Eucharist was sabotaged by indifference.
Adoration and Reparation Recovered
I have been reflecting lately on the charism of Eucharistic adoration and reparation given to so many outstanding souls in the seventeenth and nineteenth centuries. Among them are Mechtilde de Bar (1614–1698), foundress of the Benedictines of Perpetual Adoration; Adèle Garnier (1838–1924), foundress of the Benedictine Adorers of the Sacred Heart of Tyburn; Théodolinde Dubouché (1809–1863), foundress of the Adoration Réparatrice; Hermann Cohen, Augustin–Marie du Saint–Sacrement (1820–1871), founder of the Nocturnal Adoration Society; Saint Peter Julian Eymard (1811–1868), founder of the Congregation of the Blessed Sacrament; and Blessed Marie de Jésus (1841–1884), foundress of the Filles du Coeur de Jésus.
Priest–Adorers
The charism of Eucharistic adoration and reparation is being given again at the beginning of this new millennium. Priests, in particular, will find themselves drawn to Eucharistic adoration and to an ever deeper identification with Christ, Priest and Victim living forever before the Father to intercede for us. The “work” of Eucharistic adoration and reparation will go hand–in–hand with the restoration of the Sacred Liturgy and will complement it.
Like Men Who Are Waiting
In one of his novels, R.H. Benson depicts the Parousia of the Lord as a blazing “coming forth” from the Blessed Sacrament exposed in a monstrance, the rays of the monstrance becoming the light of the glorious Body of Christ filling the universe. “Let your loins be girded and your lamps burning, and be like men who are waiting for their master to come home from the marriage feast, so that they may open to him at once when he comes and knocks. Blessed are those servants whom the master finds awake when he comes” (Lk 12:35–37).