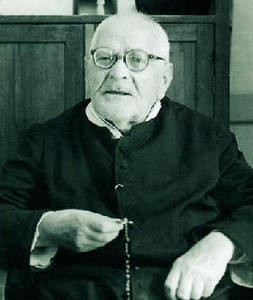 The liturgical memorial of Saint Gaetano Catanoso occured on September 20th. Pope Benedict XVI canonized him on October 23, 2005. In the homily of the Mass of Canonization, the Holy Father said:

Saint Gaetano Catanoso was a lover and apostle of the Holy Face of Jesus. “The Holy Face”, he affirmed, “is my life. He is my strength”. With joyful intuition he joined this devotion to Eucharistic piety. He would say: “If we wish to adore the real Face of Jesus…, we can find it in the divine Eucharist, where with the Body and Blood of Jesus Christ, the Face of Our Lord is hidden under the white veil of the Host”.

Daily Mass and frequent adoration of the Sacrament of the Altar were the soul of his priesthood: with ardent and untiring pastoral charity he dedicated himself to preaching, catechesis, the ministry of confession, and to the poor, the sick and the care of priestly vocations. To the Congregation of the Daughters of Saint Veronica, Missionaries of the Holy Face, which he founded, he transmitted the spirit of charity, humility and sacrifice which enlivened his entire life.