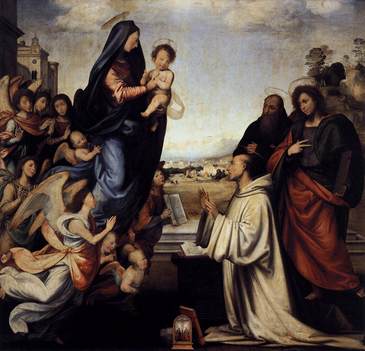 I like this painting by the Dominican Fra Bartolomeo (1473–1517), a disciple of Savonarola, because it shows our Holy Father Saint Bernard together with Saint John the Evangelist and our Holy Father Saint Benedict. The Virgin Mother is looking at the Bambino Gesù while the Bambino looks at Saint Bernard. An angel holds the open book of the Scriptures before Bernard, but Bernard is not reading the text. His eyes are raised to contemplate the Infant Christ. Bernard has passed from the written word to the Word made flesh. Saint John the Evangelist, pointing to his heart, looks on; he recognizes that Bernard is of his spiritual family. Saint Benedict, full of gravity and peace, remains in the background with his hands crossed over his breast, an expression of humility.
December 27
Saint John, Apostle and Evangelist
1 John 1:1-4
Psalm 97:1-2, 5-6, 11-12
John 20:2-8
A Liturgical Theology of the Trinity
On Christmas Day, our eyes were fixed on the Light, the Word made flesh, the Son eternally begotten of the Father. Yesterday, the feast of Saint Stephen the Protomartyr drew our attention to the Holy Spirit indwelling and overshadowing the Body of Christ. Today, Saint John the Beloved Disciple, venerated in the East as Saint John the Theologian (or John the Divine), draws our hearts to the mystery of the Eternal Father. We have, in these first three days of Christmastide, a liturgical theology of the Trinity.
The Gospel of the Father
The Gospel of Saint John has been called the Gospel of the Father and rightly so, for it is the particular charism of Saint John to lead us through the Word made flesh, and by the Word made flesh, and with the Word made flesh, into the bosom of the Father. The magnificent First Preface of Christmas wonderfully expresses the essential movement of Saint John’s Gospel. “By the mystery of your Word made flesh, a new and radiant light floods our spiritual eyes so that, even as we know God in what is visible, we are ravished (rapiamur) unto the love of things invisible.” This sentence of the Christmas Preface is a distillation of the mystical theology of Saint John. Proceeding from what is revealed, we are drawn into what is concealed. Holding fast to what is shown, we are held in the embrace of what is hidden.
Communion
This is the joy of Saint John. “The eternal life which was with the Father and was made manifest to us — that which we have seen and heard we proclaim also to you, so that you may have fellowship with us; and our fellowship is with the Father and with His Son Jesus Christ” (1 Jn 1:3). The English word fellowship translates here the Greek koinonia and the Latin communio. Saint John is saying, “Our communion is with the Father and with His Son Jesus Christ.” Now, communion simply means “union with.” “Our communion is with the Father and with His Son Jesus Christ.” But communion is also used in the New Testament to designate the presence and the effect of the Holy Spirit. We have communion — union with — the Father and with the Son by the Holy Spirit who has been given to us. This is why Saint John writes in the same epistle, “By this we know that we abide in Him and He in us, because he has given us of His own Spirit” (1 Jn 4:13).

Ad Patrem
The work of the Holy Spirit, we said yesterday, is to align us with the prayer of Christ, with the whole filial and priestly disposition of Christ towards the Father. We know that the Holy Spirit indwells us and overshadows us by the gentle, persistent, and sweet inclination of our hearts towards the Father. Like a gentle wind pushing a ship into its safe harbour, the Holy Spirit gently pushes us — into the bosom of the Eternal Father. The Holy Spirit draws us to Christ, the Word made flesh, enlightening our eyes to behold the glory of the Son, the only Son from the Father. The operation of the Holy Spirit in every age, in every time, in every place, in every soul, is to draw us ad Patrem — Fatherward — through the Son.
In Principio
Saint John emphasizes that the Word became flesh in time so that we who are of time might pass over with the Word into the mystery of the beginning. “In the beginning was the Word” (Jn 1:1), says Saint John in his Gospel, and then in the First Epistle he repeats it, “That which was from the beginning” (1 Jn 1:1). Saint John’s use of this expression to open both his Gospel and his First Epistle should intrigue us, cause us to stop, to wonder, to ponder, to pray. “The beginning” here does not refer to a temporal beginning, to a commencement in time or to the start of anything. Beginning has another meaning in both the Greek and the Latin texts. We might better translate it as wellspring or source. In the mystery of the adorable Trinity, the Father is the wellspring, the principle, the fountainhead. Saint John’s mysterious fascination with the beginning is, in fact, a fascination with the Eternal Father. “In the Father was the Word.” And again, “That which was from the Father, which we have heard, which we have seen with our eyes, which we have touched with our hands, concerning the Word of life — the life was made manifest, and we saw it, and testify to it” (1 Jn 1:1).
In Saint John, everything begins with the Father and returns to the Father. But is not that the very pattern of the whole Christian life, of yours and of mine? From the Father; to the Father. “I came from the Father, says Jesus, and have come into the world; again, I am leaving the world and going to the Father” (Jn 16:28). 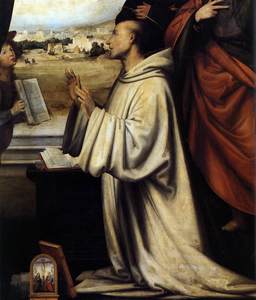 The Ultimate Joy
There is one sentence in Saint John’s gospel that is shot through with a terrible sadness: “They did not understand that he spoke to them of the Father” (Jn 8:27). In the Gospel of Saint John as in the spiritual life, this is the ultimate tragedy. “They did not understand that he spoke to them of the Father” (Jn 8:27). Conversely, in the spiritual life the ultimate joy is the revelation of the Father by Christ.
In the Cloud
The approach to the mystery of the Father is not however facile and sentimental. Today’s Responsorial Psalm makes that clear. “Clouds and thick darkness are round about him” (Ps 97:2). The imagery of the psalm is that of Sinai, the terrible and untouchable mountain. “Lo, I am coming to you in a thick cloud” (Ex 19:9) said the Lord to Moses. The mystery of the Father is shrouded in darkness and, as the medieval English mystic put it, in a “cloud of unknowing.” This is why the Son says to us in Saint John’s Gospel, “No one comes to the Father, but by me” (Jn 14:6). We are drawn to the Word made flesh by the Holy Spirit so that one with the Eternal Son, we who are adopted children, might pass over safely and surely to the Father.
Going in to the Empty Tomb
This is, I think, at least part of the message hidden for us in today’s Gospel of the resurrection. The empty tomb, like the altar in the sacred liturgy, functions as the sign of the risen and ascended Christ by whom we come into the presence of the Father. We heard in the Gospel that “the other disciple, who reached the tomb first, also went in, and he saw and believed” (Jn 20:8). The choice of words is evocative of the ritual vocabulary of the Old Testament. Saint John goes into the empty tomb in much the same way as the high priest went into the holy of holies. The absence of the body of Christ in the tomb is the sign of the abiding presence of Christ, “the fulness of him who fills all in all” (Eph 1:23). The risen Christ is our way to the Father, our passover to the Father in the Holy Spirit.
I am in the Father and the Father in Me
The three little verbs used in the Gospel account describe the way by which we, like Saint John, pass over to the Father, with the Son, in the Holy Spirit, in this and in every Eucharist. He “went in, and he saw and believed” (Jn 20:8). “Lord, show us the Father, and we shall be satisfied.” We have only to go in, to see, and to believe: to go into the altar as Saint John went into the empty tomb, to see the evidence of an apparent absence that reveals the fulness of a presence, to believe according to the words of the Word Himself, “Believe Me that I am in the Father and the Father in Me” (Jn 14:11).