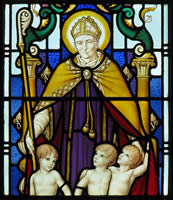 The Eucharist
The liturgy of the Wednesday of the First Week of Advent is entirely illumined by the mystery of the Most Holy Eucharist. Even before the readings, the Church alludes to the mystery of the Eucharist in the Collect. We pray that, “at the coming of Christ . . . we may be found worthy of the banquet of eternal life, and ready to receive the food of heaven from His hand.” This refers not only to the “hidden manna” (Ap 2:17) of heaven, but also to the Bread of Life given us from the altar by the hand of the priest who, in feeding us, is an icon of Christ “nourishing and cherishing” (Eph 5:29) His Body the Church.

Isaiah’s Prophecy
In the First Lesson Isaiah prophesies that the day will come when God Himself will be “a strength to the poor, a strength to the needy in his distress; a refuge from the whirlwind, a shadow from the heat” (Is 25:4). And on that day “the Lord of hosts shall make unto all people . . . a feast of fat things, a feast of wine” (Is 25:6). In the Responsorial Psalm, the Lord “prepares a table” (Ps 22:5), opening to us the hospitality of His house “unto length of days” (Ps 22:6).

Lest They Faint in the Way
Thus prepared by the Collect, the First Lesson, and the Responsorial Psalm, in the Gospel we encounter Our Lord moved by compassion on the multitudes. The words He spoke then for those people, He speaks today for us: “I will not send them away fasting, lest they faint in the way” (Mt 15:32). For us there is a greater mystery than the multiplication of loaves and fishes, for to us He gives His adorable Body as food and His precious Blood as drink.

The Eucharistic Advent of Christ
Mother Church wants us to grasp that every celebration of Holy Mass is an advent of the Lord. He who came in the lowliness of our flesh, born of the Virgin, the Same who will come in great glory at the end of time upon the clouds of heaven, comes to us sacramentally in the Most Holy Eucharist. The Eucharistic advent of Christ is in every way as real as was His advent in the flesh, and as real as His advent in majesty will be.

Saint Nicholas the Wonderworker
The Church in East and West commemorates today Saint Nicholas the Wonderworker. In the Divine Liturgy that Saint Nicholas himself served, while the holy gifts were being carried in procession to the altar, the people sang of Our Lord’s Eucharistic advent among them: “We who mystically represent the Cherubim, who sing to the life–giving Trinity the thrice holy hymn, let us now lay aside all earthly cares, that we may receive the King of all who comes escorted invisibly by Angelic hosts. alleluia, alleluia, alleluia.”

The Saints in Advent
Saint Nicholas and the other saints of Advent surround the Eucharistic advent of the Lord just as they will surround Him with the angels in the glory of His Advent at the end of time. How important it is to acknowledge the saints of Advent, to seek their intercession, to rejoice in their lives. Those who would banish the saints from the celebration of the Advent liturgy are misled and mistaken. The mission of the saints of Advent is to prepare us for the coming of Christ: for His final advent as King and Judge, yes, but also for His humble daily advent hidden under the species of bread and wine. In no way do the saints detract from the intensity of the Advent season. Each of them is given us as a companion and intercessor, charged with making ready our hearts for the advent of the Bridegroom–King.

Saint Nicholas in New Amsterdam
Saint Nicholas arrived in America with the Protestant Dutch settlers in 1624 in what was then called New Amsterdam. As much as the Protestant Reformation in Holland tried to suppress the cult of the Saints, the Dutch would not give up their beloved Saint Nicholas. Dutch customs, expressions, and even language persisted in New Yorkright into the opening years of the last century, but by that time others had come through Ellis Island, New York’s port of entry — Italians, Russians, Ukrainians, and Greeks. They came bringing icons of Saint Nicholas lovingly wrapped in the trunks that contained all their worldly possessions. They came bringing prayers to Saint Nicholas learned as little children, and bringing a confidence in the intercession of Saint Nicholas that withstood poverty, prejudice, hunger, sickness, and all the vicissitudes of a new life in a strange land.

Saint Nicholas the Glorious Patron and Wonderworker
Saint Nicholas has always had enormous appeal. He is recognized as the patron saint of more causes than of any other saint, of classes of people, cities, churches, and whole nations. He is the patron saint of thieves — not because he helps them to steal — but because he helps them to repent and change; of pawnbrokers and bankers because he knew how to use gold in the service of compassion and charity; of pharmacists, fisherman, lawsuits lost unjustly and the lawyers who lost them, prisoners, orphans, prostitutes, unmarried men, scholars, haberdashers, and bishops. He is best known as the patron saint of children, especially children who are threatened by the circumstances of a troubled family life, or by abuse.
Saint Nicholas is present to us today. He will accompany me to the altar, taking his place there among the other saints and angels invisibly present in every Mass. More than anything else, I would ask Saint Nicholas to open the eyes of our souls to the Eucharistic advent of Christ. If we are prepared for Christ’s coming in the Holy Mysteries, we will be prepared for His final coming in glory. One who lives from one Holy Mass to the next need not fear the Day of the Lord. Glorious Saint Nicholas the Wonderworker, pray for us that we may be made worthy of the advent of Christ.