Skip to content
HomeHomiliesAnd A Little Child Shall Lead Them 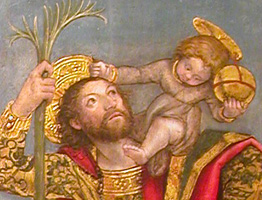 Tuesday of the First Week of Advent
Isaiah 11:1–10
Psalm 71:1–2, 7–8, 12–13, 17 (R. 7)
Luke 10:21–24
Grace Upon Grace
Saint John, in his Prologue, declares us that we have all received of the fullness of the Word made flesh, “and grace upon grace” (Jn 1:16). The prophet Isaiah tells us today just what this fullness of grace is: “And the spirit of the Lord shall rest upon Him: the spirit of wisdom, and of understanding, the spirit of counsel, and of fortitude, the spirit of knowledge, and of godliness. And He shall be filled with the spirit of the fear of the Lord” (Is 11:2–3). There are seven gifts of the Holy Spirit, seven graces, or seven “spirits” as the prophet calls them. The number seven, as you know, signifies a superabundant fullness. It is of this fullness that “we have all received, and grace upon grace” (Jn 1:16).
The Same Spirit
All who belong to Christ are given a share in the Spirit of Christ. As the psalmist says, the anointing of the Head runs down upon the beard, the beard of Aaron, and reaches even to the hem of his garment (cf. Ps 132:2). Saint Paul says, “Now there are diversities of graces, but the same Spirit; and there are diversities of ministries, but the same Lord; and there are diversities of operations, but the same God, who worketh all in all. And the manifestation of the Spirit is given to every man unto profit. To one indeed, by the Spirit, is given the word of wisdom: and to another, the word of knowledge, according to the same Spirit; to another, faith in the same Spirit; to another the grace of healing . . . but all of these things one and the same Spirit worketh, dividing to every one according as He will” (1 Cor 12:4–11).
The Order of Holiness
Isaiah goes on to describe the effects of this anointing with the Spirit of the Lord. A new order appears: one characterized by justice, by equity for the meek of the earth, and by fidelity. In a word, the new order is the order of holiness: participation in the very life of God. What are the signs of this new order? “The wolf shall dwell with the lamb: and the leopard shall lie down with the kid: the calf and the lion, and the sheep shall abide together” (Is 11:6). (This is an apt description of most monasteries.)

A Little Child Shall Lead Them
A monastery is the cohabitation of wolves with lambs, of leopards with kids, of calves with lions and sheep. The most important piece of the prophecy, however, is the last phrase: “and a little child shall lead them” (Is 11:6). Who is this Child? The psalm describes Him for us. This little Child “shall deliver the poor from the mighty: and the needy that had no helper. He shall spare the poor and needy: and he shall save the souls of the poor” (Ps 71:12–13).
Yea, Father
Are we willing to be led by the Child? The Child is misunderstood by all, save by other children. Listen to the prayer of the Child in the Gospel: “In that hour, He rejoiced in the Holy Ghost, and said: I confess to thee, O Father, Lord of heaven and earth, because Thou hast hidden these things from the wise and prudent, and Thou hast revealed them to little ones. Yea, Father, for so it hath seemed good in Thy sight” (Lk 10:21).

Dom Vital Léhodey (1847–1948)
I cannot help but recall two figures radiant with holiness who allowed themselves to be led by the Child. The first who comes to mind is a great Trappist monk of the last century. Dom Vital Léhodey was the abbot of Bricquebec during the tumultuous period of the expulsions of religious from France. He was, at the same time, charged with the economic affairs of several other monasteries and with a foundation in Japan. He was obliged to be an astute business man; he traveled extensively and, all the while, found the time and energy to write books that have become spiritual classics: The Ways of Mental Prayer and Holy Abandonment. What was Dom Léhodey’s secret? This very capable man, even in the eyes of the world, was utterly smitten by the Child Jesus, becoming tender and docile and wholly abandoned to Him. Read his biography if you can find it. The Child Jesus was his life. A Little Child led Dom Vital; the same little Child who led Saint Thérèse along the path of littleness and confidence.

Mother Yvonne–Aimée de Jésus (1901–1951)
The second figure I want to recall is the Augustinian Canoness Mother Yvonne–Aimée de Jésus, a heroine of the French resistance during World War II. Led by the Divine Child, she succeeded in reviving her monastery: a frightfully dreary place when she entered it in 1927. Everything was old and musty; the buildings, the customs, and even the nuns. Yvonne–Aimée was an extrovert, engaging and enterprising. The enclosure was like a prison for her. But the Child who led her wanted her there.
O Jesus, King of Love
Already in 1922, the Child Jesus had revealed to her the merciful goodness of His Heart. Like Dom Léhodey, Yvonne–Aimée could not resist the gentleness, the meekness, and the love of the Child Christ. He gave her a simple invocation, full of childlike confidence: “O Jesus, King of Love, I put my trust in thy merciful goodness.” She recommended it to the nuns of Malestroit. The community, weakened by internal divisions, began to pray the invocation and the little Child led them into reconciliation and unity. A transformation took place; the community found itself warmed, healed, refreshed, and energized by the Little Child, the King of Love. Today, Mother Yvonne–Aimée’s invocation is prayed all over the world, bringing inner healing and peace to souls willing to led by the Little Child. “O Jesus, King of Love, I put my trust in thy merciful goodness.”

We Need the Saints
We need the saints to interpret the Scriptures for us. We need the childlike friends of the Child to uncover for us the marvelous resonances of the Word of God given us, day after day, by the Sacred Liturgy. “A little Child shall lead them” (Is 11:6) says Isaiah. “Thou hast hidden these things from the wise and prudent,” says Our Lord, “and revealed them to little ones” (Lk 10:21).
Risk the Way of the Little Child
This Advent will you risk becoming little with Him who for our sakes became little? This Advent will you risk being led by a little Child? No one who has followed this Child has ever been led astray. Trust Him. Trust Him with your past, with your present, and with your future. And “from His fullness” you will receive — I promise it — even “grace upon grace” (Jn 1:16).